The Henry Reeve International Medical Brigade was originally created in Cuba to help victims of hurricane Katrina, which hit New Orleans, Louisiana in 2005, but it was rejected by George W. Bush at the time. The idea of unrestricted solidarity, however, remained alive, and the volunteer brigade has traveled several countries ever since. Now, it is growing in importance as the world is more and more affected by global warming and increasingly extreme weather events.

Since March 29, 40 Cuban volunteers – 16 physicians and 24 health professionals including nurses, lab workers, logistics workers, and psychologists – are working in seven tents set up in a bare gymnasium in the coastal city of Beira to provide care to the victims of Cyclone Idai, which hit Mozambique, Malawi, and Zimbabwe between March 4th and 21st, killing more than 1,000 people – 60 percent of them in Mozambican territory.

In Mozambique, data from the United Nations shows that 1.8 million people were affected by the destruction caused by the cyclone. Many of them lost their houses and are now without shelter. Many more are at risk from a cholera outbreak.

A report in photos by Rafael Stedile: 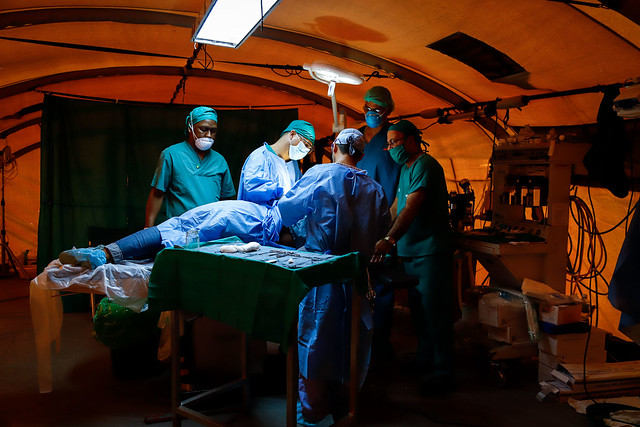 In the cyclone-hit Mozambique, the work of Cuban health workers is essential to save lives in one of the cities that is struggling the most after the tragic weather event. Coordinated by the 55-year-old epidemiologist Dr. Rolando Piloto, the brigade performs lab tests and surgeries in more than 600 Mozambicans a day, Monday through Saturday, and on Sunday duties.

More than 7,000 people — 54 percent women and 16 percent children and adolescents — have received free and open health care so far and more than 50 surgeries have been performed. In addition to medical care, patients also receive free medication and psychological support.

While all Beira residents have been directly or indirectly affected by Cyclone Idai, the problems they report in the camp are not necessarily related to it. The most common conditions reported are chronic conditions including hypertension and diabetes, as well as acute respiratory disorders.

“I like them because we are being treated as equals. Everyone has to get in line to receive care, there is no special treatment for those who are monied or influential in a hospital,” 28-year-old Aida Lucia said, after she took her daughter to one of the tents and received basic medical care.

*Rafael Stedile is a photographer and was invited to visit Mozambique by the Academic Action for the Development of Rural Communities (ADECRU), which is supporting our reporting. He is part of the Solidarity Brigade of the Vía Campesina, which brings together militants, health professionals, and rural workers of Brazilian people’s movements.