Tensions remained high throughout Wednesday after a group of trespassers wearing clothes in support of the self-proclaimed president of Venezuela Juan Guaidó forcibly entered the Venezuelan embassy in Brasília, the capital of Brazil, early in the morning. The invaders only left the building after more than 12 hours.

The pro-Guaidó group was escorted out of the Venezuelan embassy by the police through the back exit.

The police were called in the morning and pepper sprayed groups that gathered outside the Venezuelan offices to demonstrate in support and against the trespassers several times during the day.

The decision to leave the embassy was taken after hours of negotiation between a representative of the trespassers, Tomás Silva, and a Brazilian foreign ministry officer, Maurício Correia.

Learning about the end of the invasion, hundreds of supporters of the Venezuelan president Nicolás Maduro who were gathering outside the embassy celebrated and chanted democracy and sovereignty in Latin America.

The incident started hours before the beginning of the 11th BRICS Summit, also in Brasília, when leaders of Brazil, Russia, India, China, and South Africa are meeting. Except for Brazil, all countries of the group support Nicolás Maduro.

In the afternoon, the president of Brazil, Jair Bolsonaro, wrote on Twitter that he repudiates the interference of “external agents” in the embassy, and that his government is “taking the necessary measures to maintain public order and prevent acts of violence, in accordance with the Vienna Convention on Diplomatic Relations.”

The Brazilian congressman Glauber Braga, of the Socialism and Freedom Party (PSOL), spoke from inside the embassy and argued that Brazil’s forein policy was “playing a dubious game that could aim to escalate the conflict,” questioning why no orders were given until late in the afternoon for the trespassers to leave the embassy, as authorities had been officially notified of the incident.

Another Brazilian congressman who was also inside the embassy in support of the Venezuelan government, Paulo Pimenta, of the Workers’ Party (PT), said that the intruders are a paramilitary group hired to break into the diplomatic offices.

“The embassy is under the control of [Nicolás] Maduro’s representative, but the trespassers remain inside the offices,” Pimenta said during the day, in response to a tweet by senator Eduardo Bolsonaro, who claimed that the employees of the embassy voluntarily acknowledged Guaidó as president. 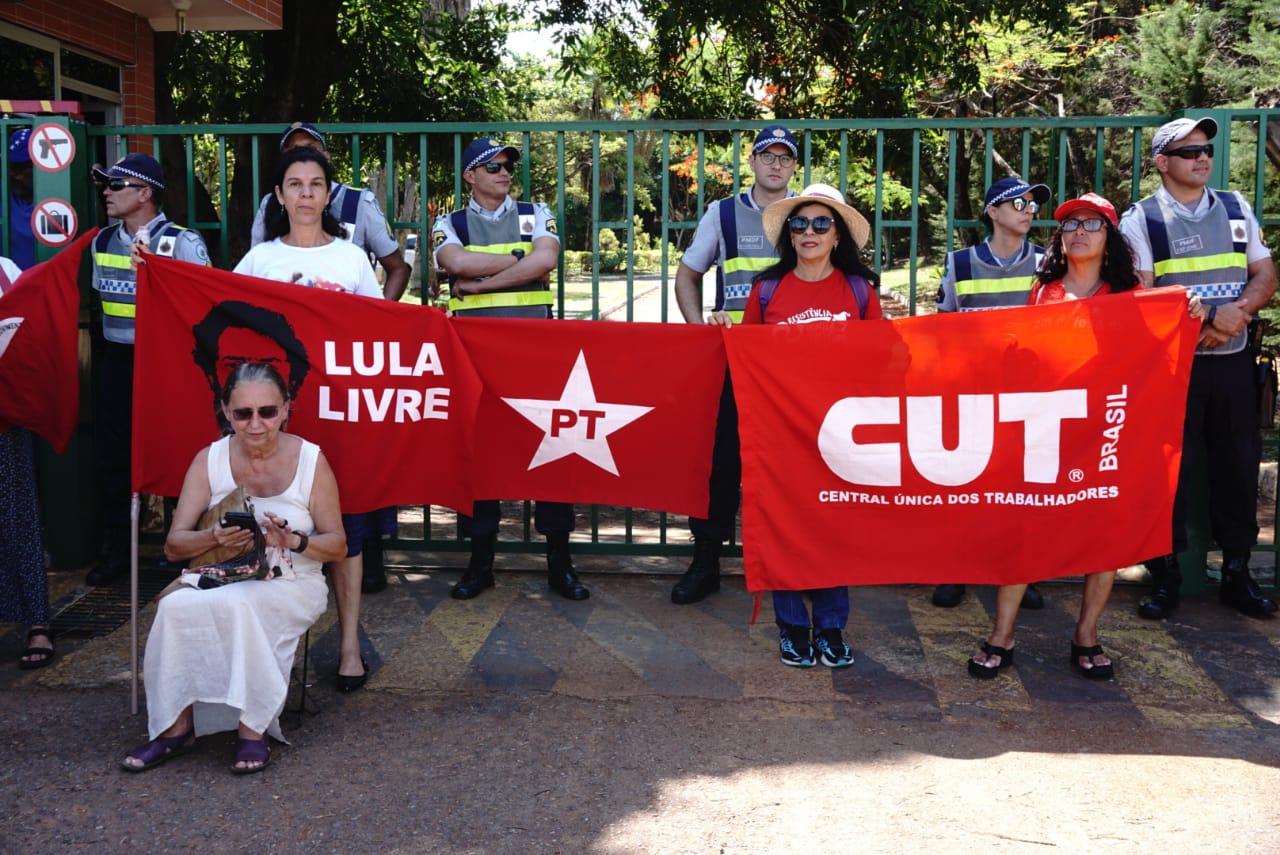 The trespassers entered the building where Venezuelan officials live with their families -- four children were in the premises --, and later a group also entered the embassy to try to resolve the situation.

Three members of Brazil’s Congress were part of this effort: in addition to Pimenta and Braga, Samia Bonfim, of the Socialism and Freedom Party, was also present, as well as a federal judge, a chief of federal police, a military police commanding officer, and the representative of the Brazilian government’s foreign ministry, Mauricio Correia.

In the afternoon, around 300 people, including Maduro supporters, Guaidó backers, and journalists gathered outside the embassy.

The organizations that joined the demonstration in solidarity with Venezuela include the Landless Workers’ Movement (MST), the Homeless Workers’ Movement (MTST), the Communist Party of Brazil (PCdoB), the PT, the PSOL, the Brazilian Communist Party (PCB), the National Union of Students (UNE), the youth organization Levante Popular da Juventude, and the Unified Workers’ Central (CUT). 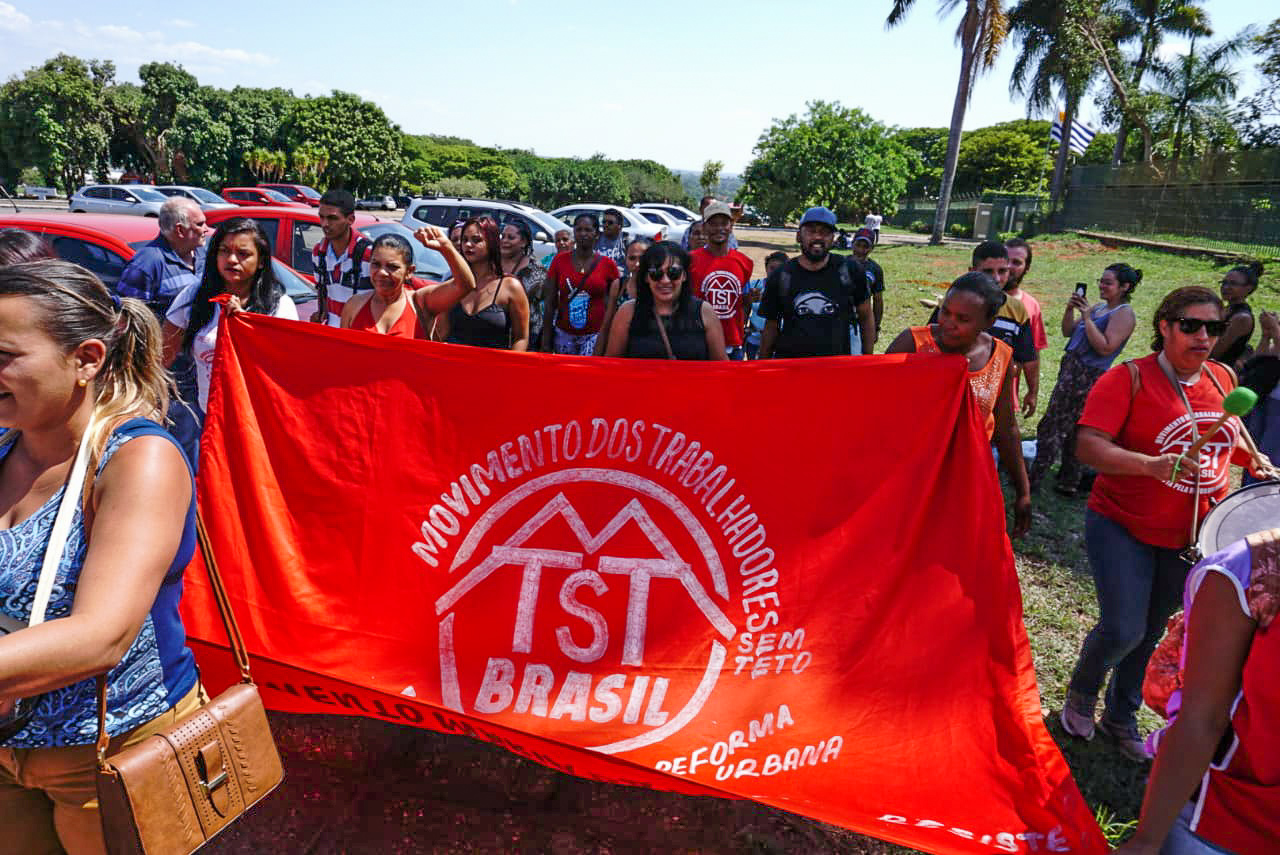 Congresswoman Erika Kokay, of the PT, said the invasion of the Venezuelan embassy by Guaidó backers was a criminal act that “damages sovereignty and democracy,” calling authorities to investigate the case.

“The trespassing of the Venezuelan embassy in Brasília exposes the Bolsonaro administration on the day of the BRICS Summit. The message that sends to the world is that embassies of governments that are not ideologically aligned with Brazil are vulnerable,” she said.

The Jair Bolsonaro government recognizes Guaidó as president of Venezuela.