In a short time, we overcame our mourning. My community is back to normal, using ornaments, painting, shouting. We are lifting our heads, moving on with life. I have already gathered my people together to start a new life.

With the loss of my father, we were very lost, at a loss for words. I spoke to my community about how we are going to organize from now on with this situation that we are still going through, it’s very difficult.

Some communities still do not have any signs [of covid-19]. We are concerned about other peoples who have not yet caught this virus.

He, while still very young, was part of the demarcation process of Xingu indigenous lands, he left behind a very beautiful tale. In the month of August (the month of his death), we will honor him. I will invite all the peoples of the Xingu to attend, we are going to have a party in his honor.

My father died fighting for indigenous peoples, defending the land, talking about indigenous rights, going to Congress to speak to lawmakers. I told them [the Yawalapiti people] that it will be hard for us to have someone else like my father. My father was a diplomat. He was patient with people, he knew how to talk them without shouting or hurting the person.

He left for another world. Today he is resting. This means that he left a very beautiful tale in the Xingu region.

When I see the Xingu on a map, I think that my late grandfather, my father, my uncle, who are already gone, gave us this land as a gift. They demarcated the land and gave it to the new generation, my generation. He [Aritana] used to say: ‘Son, take care of this land. Now, it is your responsibility, the young people, to take care of the forest, the river and the land. Tomorrow, you may be giving your child this land, this forest, this river. Your grandson will need this space ’.

That which my father said to me is still in my head today. When I see the Xingu map, I immediately remember my father's words. They left an imprint in my mind and I will always remember that. 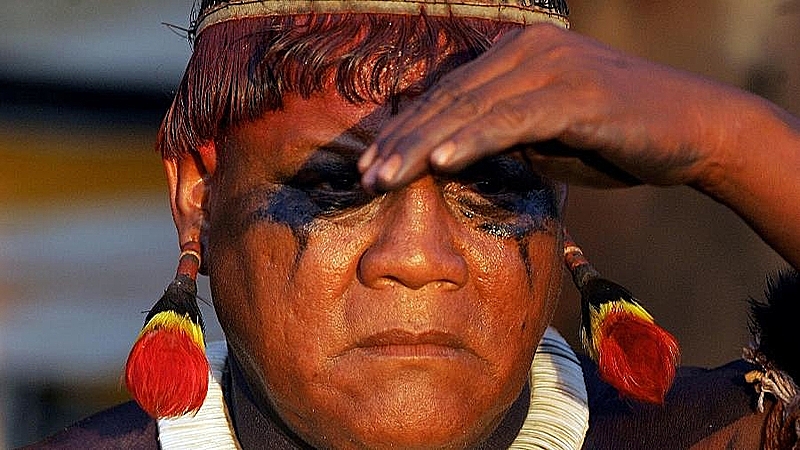 We plant a garden and have to know how to reforest it. This is awareness we are raising in the Xingu region.

The chief's goal is to maintain the forest, care for the river, care for the land. The forest was planted by the creator. We are cutting down the forests, and the spirit goes with it. That’s why you’re having this climate change. Today, we raise awareness for the new generations, so they can also take care of the forest. We are learning how to reforest. We make a garden and we have to know how to reforest it. It is this awareness that we are applying in Xingu.

As the first son of chief Aritana, my father passed this responsibility on to me. I was prepped for this. Today, I take on that responsibility.

My father thought that I should study. Study and go to college. That was my father's goal. He encouraged me to do that. He said: ‘Son, you will have to study, because in the future you will take over the Xingu’.

At the moment, I'm going to college, doing a master's degree in linguistics. My father will not see the defense of my thesis. That was my father's desire. He was very happy to see his son go to university, to compete with non-indigenous people.

Today, I represent the indigenous population of the Xingu, continuing his struggle. Yes, I will keep up the fight he passed on to me.

Today, I represent the indigenous population of the Xingu, continuing his struggle. I will, yes, carry on the fight he passed on to me. Take care of the land, take care of the people, articulate with the people and speak to the authorities in Congress. The responsibility my father passed on to me is great: taking action on behalf of the indigenous people of the Xingu.

He always spoke like this, and it became engraved in my mind: ‘My son, you are an academic. You learned to speak Portuguese, you know how to write, but you should not forget your culture. Keep your culture. You were born to be a Yawalapiti ’.

* Tapi Yawalapiti is a leader and chieftan of the Yawalapiti people, from the Upper Xingu region. This article was written from Tapi's testimony by telephone to reporter Erick Gimenes, from Brasil de Fato, on November 5, 2020. His father, chief Aritana Yawalapiti, had died three months earlier, on August 5, in Goiânia, due to complications caused by covid-19. He was one of the greatest leaders of the Xingu Indigenous Reserve, known today as the Xingu Indigenous Territory (TIX), a land he helped to demarcate alongside his brothers Cláudio and Orlando Villas-Bôas.