On July 26, a group callled “Revolução Periférica” (Peripheral Revolution, in English) set fire to a statue in honor of the bandeirante Borba Gato, located on Santo Amaro Avenue, in the south of São Paulo. The action took place on the same day of another round of protests against President Jair Bolsonaro occurred, even though the two events seemed unrelated.

About 12 hours after the act, the Civil Police of the State of São Paulo arrested Thiago Vieira Zem in an alleged flagrante delicto. The 35-year-old merchant allegedly used his van to transport the people who set the monument on fire. He also allegedly carried the tires used to block part of the avenue in his vehicle. Zem is on probation.

On Wednesday afternoon, on July 28, the delivery app worker Paulo Roberto Silva de Lima, known as Galo, voluntarily presented himself to the 11th Police District of Santo Amaro, where he was arrested along with his wife, Jessica. They have a 3-year-old daughter. The accusations on them include arson, criminal association, and license plate tampering.

:: Mobilizations against Bolsonaro gain strength and mobilize around 750 thousand people ::

Also on Wednesday, Danilo Silva de Oliveira, known as Biu, went to the 11th Police District of Santo Amaro. There, he confirmed his participation in the fire and said that it intended to raise the debate about monuments that honor murderers and torturers.

Borba Gato and the myth of “the pioneers”

In the book A Concise History of Brazil, the historian and political scientist Boris Fausto explain that the bandeiras were expeditions formed by some white men, mixed-race people and many indigenous people who had been persecuted and captured; the caravans went towards inner Brazil – known as sertão – in search of other indigenous people to be captured and sold as slaves. These incursions were characterized by the torture, murder, and rape of native people.

Most of the bandeirantes – the white men who led the bandeiras – were from the state of São Paulo. Today, many streets, avenues, monuments, and squares throughout the state were named after the main bandeirantes – main meaning the cruelest and fearsome – such as Manuel Borba Gato, Antônio Raposo Tavares, and Domingos Jorge Velho. There is even a television channel in the country whose name is Bandeirantes.

Actually, in the context of international repercussions of recent protests by the Black Lives Matter in the United States and its challenge to monuments that pay homage to slavers, a project called demonumenta was launched in January this year, an initiative of USP (University of São Paulo) with partners from other countries. The demonumenta project “proposes a debate on coloniality embedded in public institutions and collections”, particularly those located in Brazil. On its official website, you can watch the meetings, which were recorded, and access texts and other materials on the subject.

Illegalities in the approach of the case 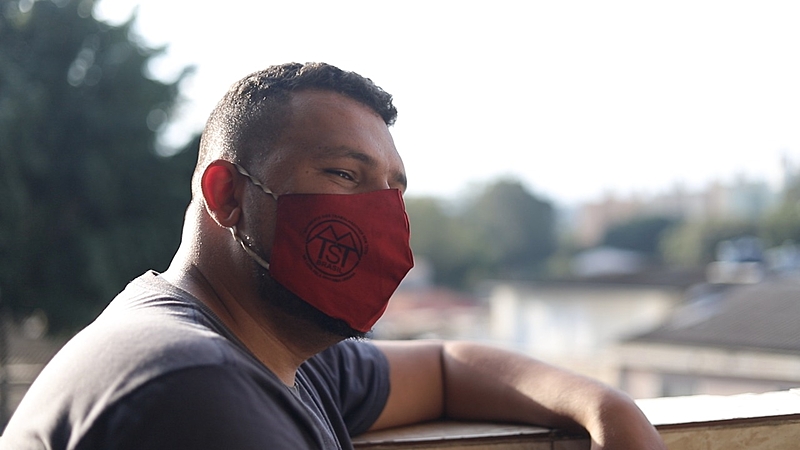 The app driver worker Galo was arrested. His defense points out to irregularities in the process  / Zé Bernardes

Back to the recent case in São Paulo, Thiago Zem's defense points out to irregularities such as the accusation of flagrante delicto many hours after the event and the fact that the police entered his house without a search warrant. Zem claims he was hired to take the tires to the south of the city of São Paulo when, passing by Santo Amaro Avenue, the service contractors asked him to stop the vehicle and began unloading the tires. He is charged with damage to property, arson, criminal association, and public data tampering.

With regards to other people arrested, in a press release, Paulo Galo's defense attorneys highlight his and Jessica´s collaboration in spontaneously presenting themselves to the police station, likewise Danilo Oliveira. They condemned the arbitrary nature of the detention of Paulo's wife, inasmuch she was not at Santo Amaro Avenue when the statue was set on fire. Police say that calls made by Paulo using his wife's cell phone, as well as images of the burning statue shared by the woman on social media, are pieces of evidence of her involvement.