A new Quaest survey, ordered by Genial Bank and released this Wednesday (June 3), points out that Jair Bolsonaro’s government (Liberal Party) is presenting some signs of recovery in the opinion polls but is still having difficulties in the reelection race.

The fall in the rejection of the president's administration, mainly among Brazil Aid beneficiaries, had not much impact on the electoral race. A study shows that former President Lula (Workers’ Party) remains steady at the top of the polls and may win in the first round.

The resumption of Brazil Aid caused the Bolsonaro government to reach its lowest rejection rate since the survey began, in July 2021. Now, 43% evaluate federal administration negatively, while 27% consider it positive.

The improvement of the government's image is perceived among voters who receive Brazil Aid payments. In June, the gap between the negative and positive evaluations was 27 percentage points. In August, the gap dropped to 11 points. 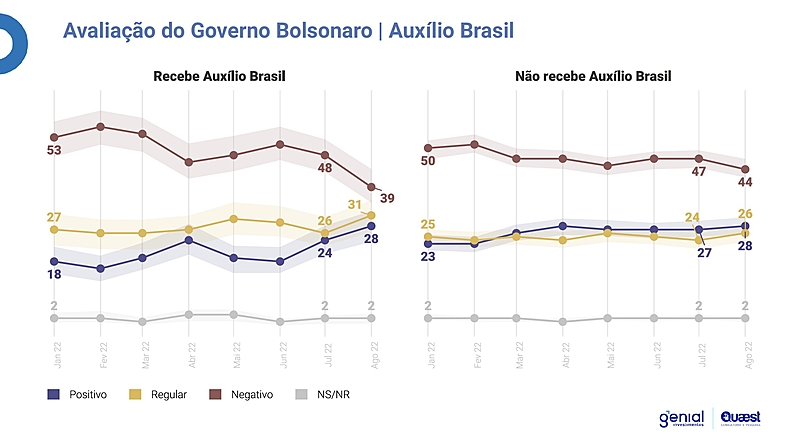 Evaluation of the Bolsonaro government among Brazil Aid beneficiaries, according to the Quaest/Genial survey

The government also presented an improved image among voters that supported the president in the 2018 elections. 57% of Bolsonaro supporters see his administration as excellent or good. At the beginning of the year, it was only 45%.

Political scientist Felipe Nunes, Quaest’s director, published an analysis of the survey on Twitter. According to him, the signs of improvement in the voters' evaluation of the government are due to measures taken by the federal government.

According to Nunes, the main explanation for this improvement in the public perception of Bolsonaro’s government and the fact that Bolsonaro's and Lula's voting intentions are getting closer among voters in important sectors of the electorate is the future expectation effect generated by the president with the measures adopted in recent months.

He also points out that fell from 25% to 21% the total number of voters who believe that the main person to blame for the rise in fuel prices is Bolsonaro.

Therefore, the study shows that the country’s current president managed to outsource the blame for the crisis to factors external to the country, which today accounts for 34% of respondents.

Read below the full analysis published by Quaest’s director:

Tweet: This month’s Genial/Quaest survey shows an improvement in the perception of Bolsonaro’s government, which now has 27% (+1) of positive evaluations and 43% (-4) of negative evaluations. This is the lowest rejection rate for the government since the Genial/Quest survey began, in July 2021.

Ciro Gomes (Democratic Labor Party) reached 5%, while André Janones (Avante) had 2%, the same percentage as Simone Tebet (Brazilian Democratic Movement). Pablo Marçal (Prosperity Party, also known as Pros) had 1%. The abovementioned percentages are of a “stimulated scenario”, when voters must choose a candidate from a list of pre-candidates. The other presidential candidates did not score.

Lula remains the winner in all scenarios for the second round of the presidential elections. Compared to the surveys made in July, Lula and Bolsonaro varied within the margin of error. Lula had 53%, and now he has 51%. Bolsonaro jumped from 34% to 37%.

The poll interviewed 2,000 voters face-to-face between June 28 and July 31, and was ordered by Genial Investments. The margin of error is plus or minus two percentage points. The confidence index is 95%. The poll is registered in the Brazilian Superior Electoral Court under the number 02546/2022 and had a total cost of 139,005.86 reais (about US$ 26,874).