Trade unions and social movements took to the streets in several cities across Brazil on May 1st to protest against labor legislation setbacks and the imprisonment of the country’s ex-president Luiz Inácio Lula da Silva. This year, seven trade union federations and different social movements staged a unified rally, protesting for workers’ rights and freedom for ex-president Lula, who is being held at the Federal Police headquarters in Curitiba. 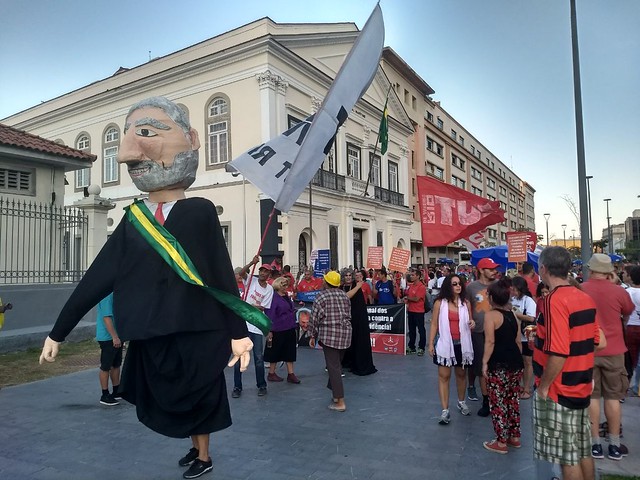 In the city of Rio de Janeiro, a rally was organized by the Unified Workers’ Central, where a performance by theater troupe Companhia Emergência Teatral criticized Brazil’s selective justice system. After the performance, protesters marched around the city’s central area.

Maria das Neves, 55, participated in the protest and believes this is not the time to be a passive witness. “If we just stay home watching TV, nothing will change. We have to fight for our rights as workers, because they are being taken away from us. We also have to fight for Lula’s freedom and for our democracy. We have to crush this elite that is against the poor,” she said.

The demonstration in Rio was not like traditional rallies, as protesters were led by Bloco da Democracia, a drum group that played original songs for the occasion. Their samba lyrics claimed, “they want to shut up people’s vote, they will not muzzle our vote, and we will chant, ‘I want Lula in office once again.’”

Street vendor Maria Alice Lopes, 32, decided to set up her stall at the Praça XV, the square in downtown Rio where the rally started, to work while also participating in the demonstration. “My work allows me to be wherever I want to be. Today I want to protest and work at the same time. It’s important to me to be here today. Workers are suffering a lot of injustice. I am protesting against all savagery that is going on in the country. We must change that,” she said.

There were other protests in Rio, organized by the CTB and the Brazilian Popular Front (Frente Brasil Popular), and also a demonstration in the Complexo do Alemão, an area of slums in the north side of the city. In other cities in the state of Rio de Janeiro, there were demonstrations since Monday (30). In Campos dos Goytacazes, bank, oil, and construction workers, as well as students, protested on the eve of May Day. Oil workers also staged demonstrations on May 1st at airports in Campos, Macaé, Farol de São Tomé, and Cabo Frio. There was also a unified protest gathering different professionals in the city of Angra dos Reis, called the Outcry of Resistance.

In Curitiba, there was a lot of music and high spirits to protest on May Day. Activists with different slogans came together at Santos Andrade Square, in the central area of the city, and a protest in the morning marched to the surroundings of the building where Lula is being held.

As usual, the unified May Day protest in Curitiba followed a political agenda. Zélia Jardim, a teacher who came from Rio de Janeiro to participate in the Curitiba protest, said the massive presence of workers on the streets refutes the hegemonic narrative that Lula should be kept in prison. “It shows people are resisting, resisting, resisting. We don’t want him [Lula] in prison because we know about the whole persecution. Fascists will have no say in this Brazil we want to build,” she claimed.

The Workers’ Party leader in the country’s Lower House, Paulo Pimenta, recalled that Lula celebrates 50 years as a member of the São Bernardo Metal Workers’ Union, and this was the first time the former president did not participate in May Day celebrations.
“This is not ordinary. In a way, everyone here is making an effort to do what Lula has asked of us: to represent his voice. The fact that this unified protest is taking place in Curitiba is a huge show of support from social and union movements for him,” Pimenta said.

Guilherme Boulos, the leader of the Homeless Workers’ Movement (Movimento dos Trabalhadores Sem Teto – MTST) and a presidential pre-candidate for the Socialism and Liberty Party (Partido Socialismo e Liberdade – PSOL), said the unification of different political and social forces on this May 1st is an antidote for a growing culture of hate.

“We’re witnessing an outbreak of fascist violence, the same escalation that has led to Marielle’s murder, the attack against the pro-Lula camp, his arbitrary detention. Right now, we have to stay together,” he claimed.

CUT’s national chair, Vagner Freitas, highlighted how important it is right now to bring people together to prevent the weakening of labor rights. He also said Lula’s participation in this year’s presidential elections is a matter of democracy and linked the case to Brazil’s economic and political recovery.

“If we want the possibility of development, of seeing economic growth again, strengthening rights, the only way is the democratic way. Without him [Lula] in the elections, the way will be fascism, intolerance, and the worsening of the country’s situation,” Freitas argued.

One of the thousands of workers who participated in the rally in Curitiba, teacher Rui Barbosa said he believes Lula could possibly be elected again. Barbosa brought a newspaper from October 22nd, 2002 to the rally, reporting on the first time Lula was elected president.

“It’s a way to remember the idea he, himself, said he represents. They are trying to stop this idea. To talk about a blue-collar worker in office is to talk about the biggest symbol of people’s struggle in Brazil, and we want that again,” he said.

Before the rally in Curitiba, Brazilian artists performed for activists, including Beth Carvalho, Flávio Renegado, Maria Gadú, and Ana Cañas. 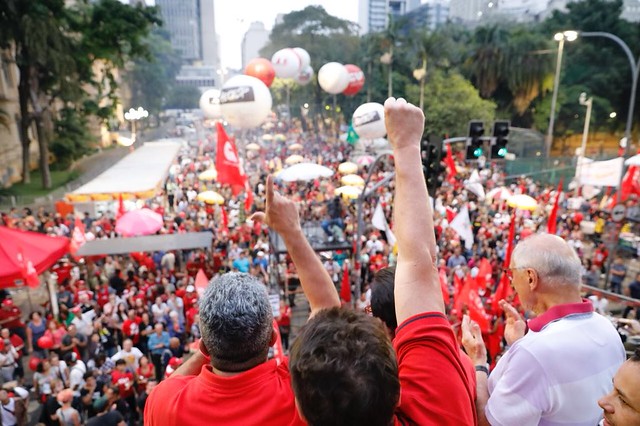 The May Day demonstration organized by the country's seven major trade union federations in downtown São Paulo also protested against ex-president Lula’s imprisonment and the labor reform that passed in 2017.

While the main leaders of the Workers’ Party (PT, Lula’s party) were participating in the rally in Curitiba, in São Paulo the party was represented by its chair in the state, Luiz Marinho, as well as by councilman Eduardo Suplicy and Congress members José Américo Dias, Paulo Teixeira, and Vicente Cândido. Manuela D’Ávila, the Brazil’s Communist Party (PC do B) presidential candidate, attended the São Paulo event briefly before going to Curitiba.

In São Paulo, politicians, union leaders, and activists with special signs and shirts protested against Lula’s prison. “[Ex-]president Lula is still outraged, but collected. He knows what his role is, and he conveys that to us everyday so we can remain hopeful. On this May 1st, we are keeping our spirits up to keep fighting for victory, which will definitely come. May I remind you that [ex-]president Lula’s did not lose his political rights. We have to keep mobilizing to pressure the Supreme Court to be accountable right now, because Lula represents hope,” Marinho said.

For José Américo, the coming together of trade unions for Lula’s freedom is historical. “For the first time, the federations came together to hold a protest that is above any political slogan, which is [ex-]president Lula’s freedom. He is being held in Curitiba, by the partisan, sectarian, crypto-fascist justice of [judge Sérgio] Moro and [prosecutor Deltan] Dallagnol, who want to kick Lula out of the electoral process,” he said.

CUT chair in São Paulo, Douglas Izzo, also talked about the importance of trade unions coming together. “It’s a historical rally. The seven federations coming together to protest for Lula’s rights and freedom, for a political prisoner convicted without evidence. Lula was the best president ever for workers. It’s an act of resistance, and the defense of democratic rights, of Lula’s right to run for president, and against the labor reform,” he said.

On the stage in São Paulo, there were not only political speeches, but also performances by musician Chico César, band Liniker e os Caramelows, rapper Preta Rara, and samba singer Leci Brandão.

During his concert, Chico César expressed his solidarity with the victims of a massive fire that destroyed a building occupied by squatters in downtown São Paulo last Tuesday (1). “The homeless are abandoned. It’s sad when there are more homes with no people than people with no home. There must be social justice. When the governor [of São Paulo, Márcio França] blames the people, there must be a response to that. And the response would be to occupy the state government office,” César said during his concert on May Day.