From Luiz Inácio Lula da Silva’s hometown of Caetés to seventeen capital cities around Brazil, including São Paulo, Curitiba, Belo Horizonte, and Rio de Janeiro, to sixteen countries around the world, the streets were filled of people this Sunday shouting and demanding justice and freedom for the Brazilian ex-president, who was arrested on year ago today.

Hundreds of thousands of people participated in more than 32 activities to commemorate the day that marks one of the most important events in the lawfare attacking the leftist leader and former president of Brazil.

In Curitiba, outside the Federal Police headquarters where he has been held for the last 365 days, more than 10,000 people gathered to show their support and share their energy of strength with Lula.

“It has been one year since we started to suffer this psychological massacre against the entire family,” his eldest daughter Lurian Lula da Silva told Brasil de Fato in Curitiba. “And it’s been a really difficult year, not only because of his arrest, but for all the people we lost. The most recent one, Arthur [Lula’s 7-year-old grandson], hit us all really hard. And we keep wondering, how can he be there all alone, experiencing such a huge loss like this? And all this love, this warmth, the political support, that gives him strength and the family too.”

Here is a summary produced by Brasil de Fato of the rallies that took place in Brazil and the world on Sunday. 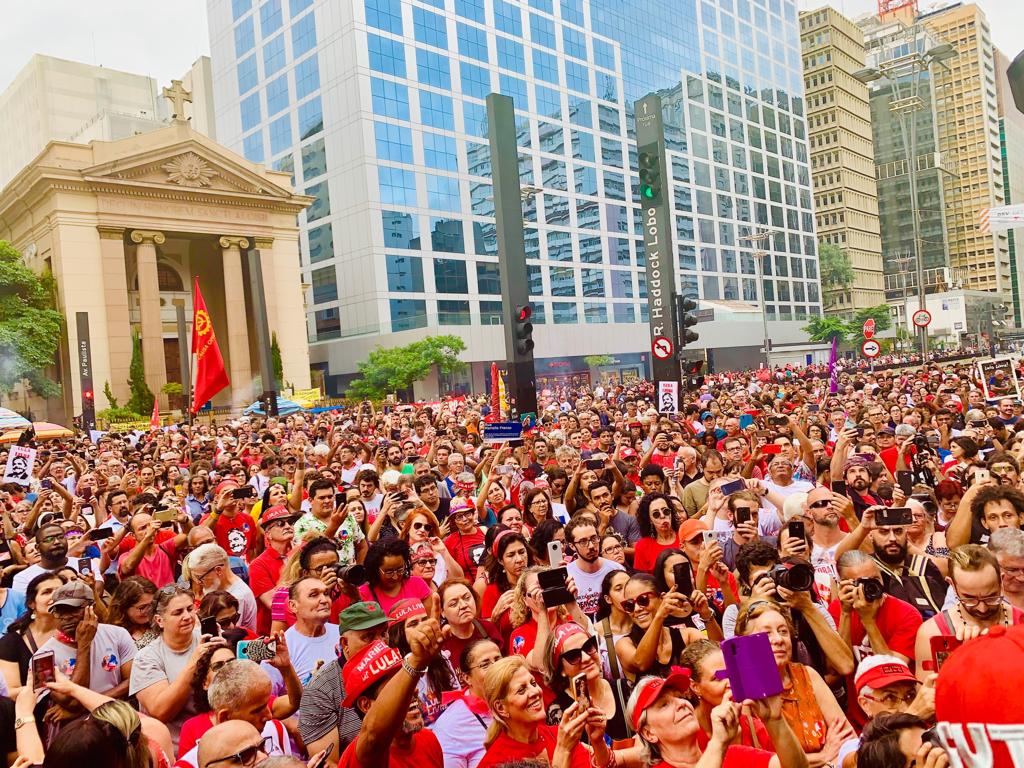 More than 10,000 people gathered in Brazil’s largest capital, called by the People’s Brazil Front and the People Without Fear Front. A few blocks away from the demonstration, a small rally in support of Operation Car Wash was held. A pro-Lula activist was assaulted by conservative protesters. 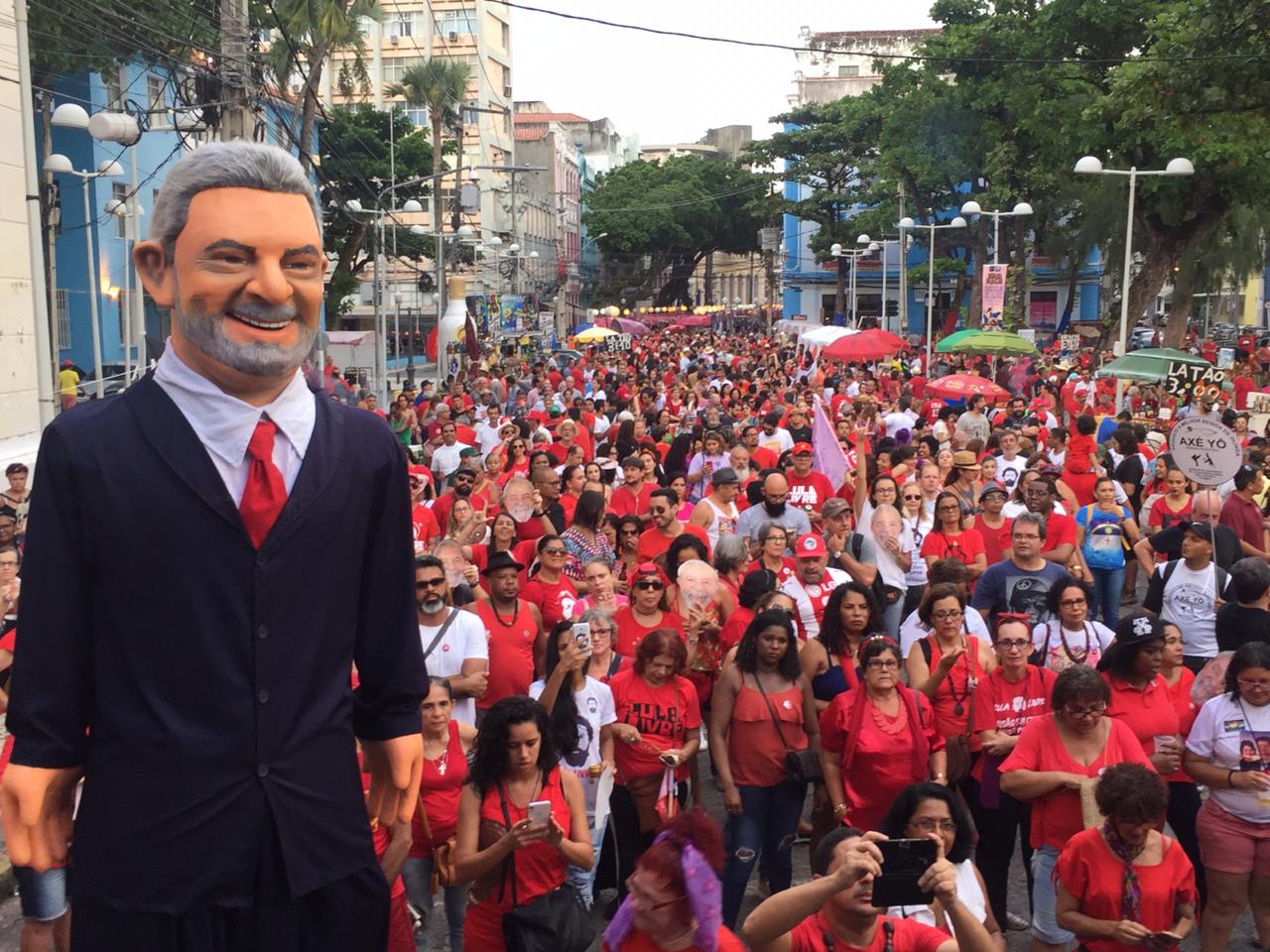 A demonstration held in downtown Recife gathered artists and Carnival groups. More than 10,000 people also came together to sing and chant for freedom for Lula.

The artists and groups played folk music such as frevo, maracatu, and afoxé. Samba groups and poets also performed, as well as popular bands. 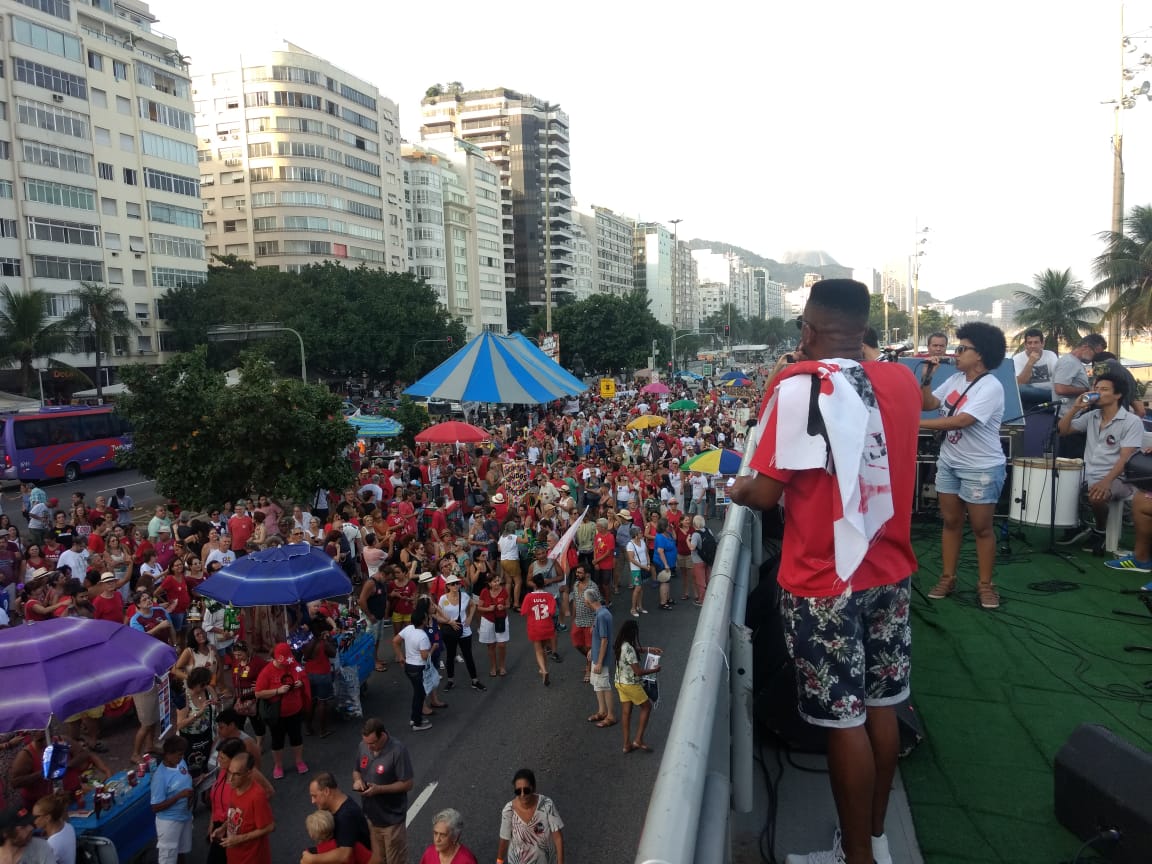 Nearly 2,000 people took part in the Democracy and Justice Festival on Sunday afternoon on the shore of Copacabana, in the major demonstration organized by Rio locals to call for freedom for ex-president Lula.

The festival started with a panel discussing the impacts of the pension reform for workers, followed by political speeches and cultural performances, as red-clad demonstrators danced to samba songs and held signs calling for Lula’s freedom.

Lula’s former foreign minister, Celso Amorim, delivered an emotional speech. “It is a day of joy as this demonstration moves and touches our heart, but it is also a sad day as we see president Lula has been in prison for one year, deprived of interaction with the people, which is the most precious thing to him,” Amorim said. 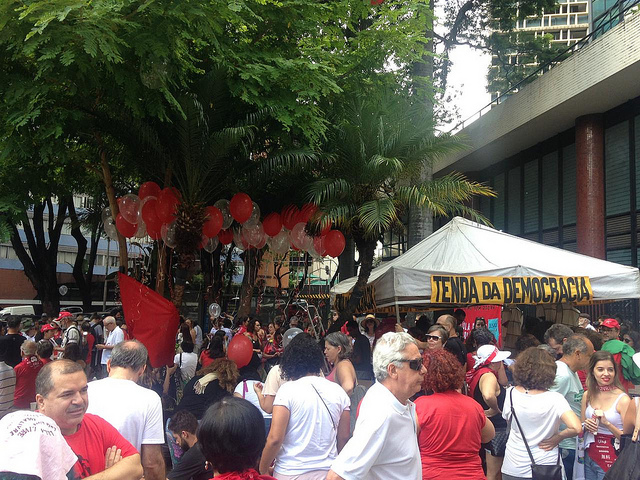 In Belo Horizonte, the demonstrations started early in the morning, where children, young people, adults, and older adults carried signs with messages supporting the Workers’ Party leader and attacking the Jair Bolsonaro administration and the agenda that can greatly hurt the working class, such as the pension reform bill. 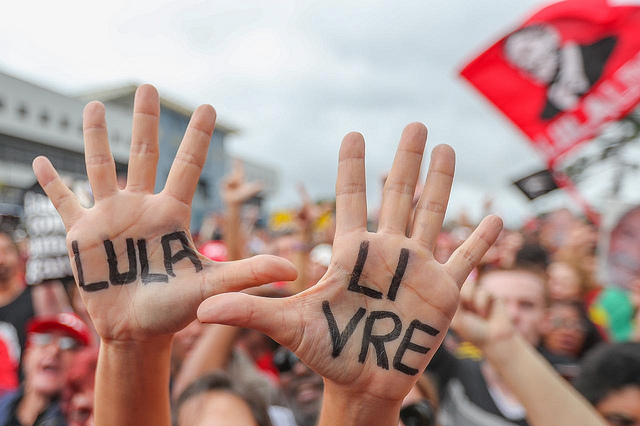 Thousands took part in a large demonstration organized to call for ex-president Lula’s freedom in Curitiba, southern Brazil, where he is being held | Ricardo Stuckert

In Curitiba, where the former president is being held, pro-Lula activities started early with a march to the Free Lula Vigil, outside the Federal Police building where Lula is being held.

According to the organizers, approximately 10,000 people attended the demonstration, including members of left-wing parties, leaders of people’s movements and unions, and artists. 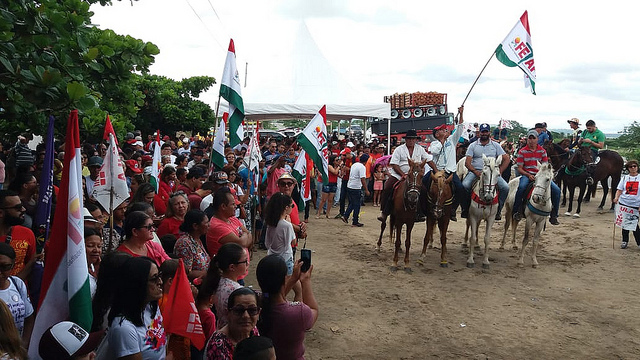 Rally started with a parade to Lula’s hometown, in the dry backlands of Brazil’s Northeast region | Rani de Mendonça

More than 500 people took part in the Free Lula Vigil demonstration in the small town of Caetés, in the dry backlands of Brazil’s northeastern state of Pernambuco, where the former president and popular leader was born.

The activities started with a 30-car-long parade coming from the neighboring town of Garanhuns playing music, waving flags, and shouting words in support of Lula’s freedom.

Lula supporters sat down for a breakfast ceremony to recall that Lula was responsible for removing the country from the hunger map. “May this breakfast remind us and give us the energy to fight for that who gave us food, literally. May we remember the time when Brazilians had food on the table. Now we are witnessing hunger again, not only here,” Vado Pontes, a Garanhuns local, said.

In France, demonstrators gathered in the Trocadéro Esplanade in Paris, including the leftist leader Jean-luc Mélenchon of the France Unbowed party, and the Brazilian philosopher Marcia Tiburi, who decided to leave Brazil in March after receiving a series of threats.

In London, United Kingdom, demonstrators drove on a bus waving “Lula Livre” (Free Lula) signs. Tereza Campello, the ex-minister of Social Development and Fight Against Hunger during the Dilma Rousseff administration, took part in the protest.

In Germany, protesters gathered in the Hermannplatz spreading banners calling for Lula’s freedom. Approximately 100 people attended the rally, according to a survey conducted by participants.

In Portugal, protests took place in Lisbon, where artists performed and delivered speeches calling for Lula’s release from prison.

In Spain, demonstrators marched around Barcelona denouncing the political nature of the ex-president’s arrest. 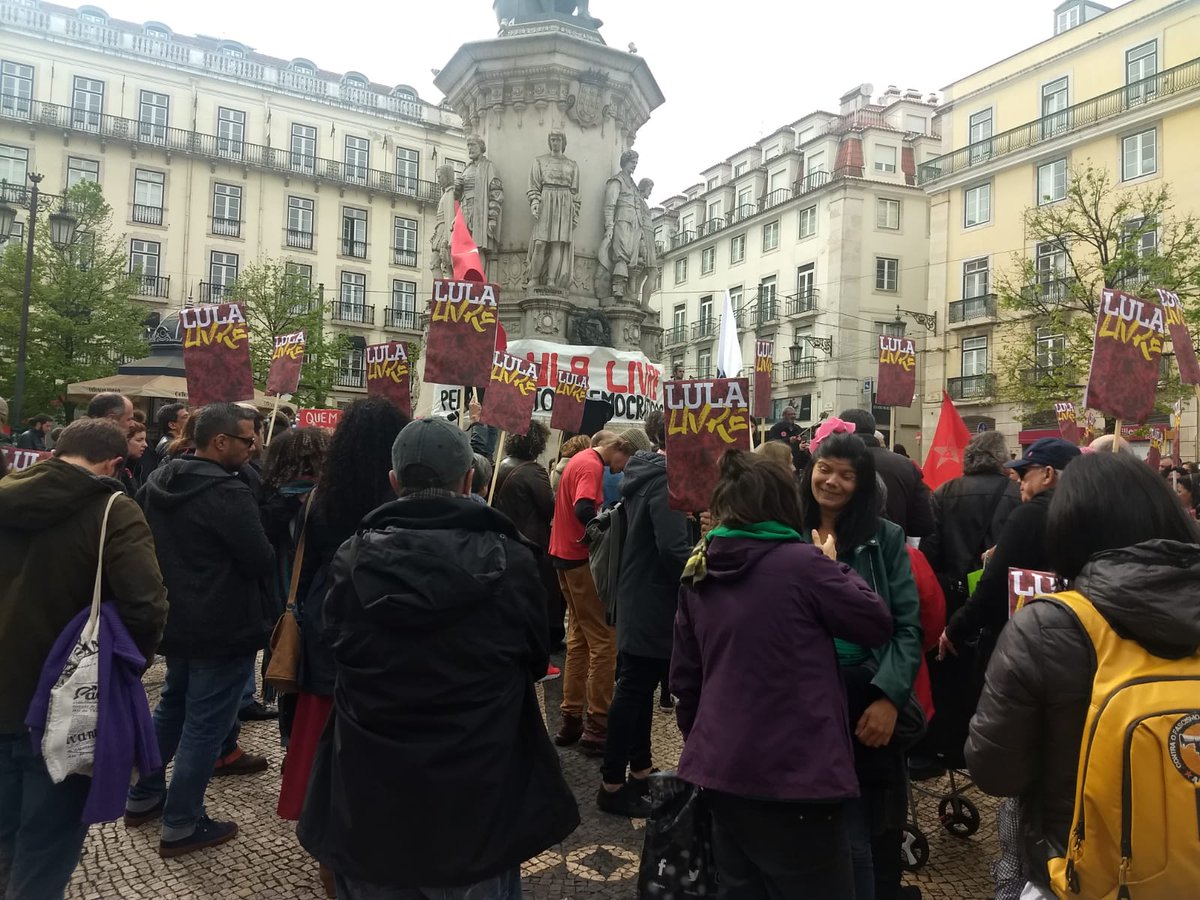 Protests were held not only in Europe, but also in Montevideo, New York, Los Angeles, Boston, Mexico City, Sydney, Melbourne, and Saint-Louis.