Demonstrators held rallies on Sunday to show their support for the Brazilian president, Jair Bolsonaro, while calling for myriad demands with touches of authoritarianism.

The calls on social media claimed last week the demonstrations would “bring Brazil to a halt” with rallies all over the country, but the numbers reported about the protests were smaller than the nationwide mobilization in defense of education on May 15. In several cities, the police did not disclose an estimated number of participants in the Sunday rallies.

Groups such as the Free Brazil Movement and Vem Pra Rua, which led the demonstrations calling for the ousting of president Dilma Rousseff in 2016 and helped elect Bolsonaro in 2018, did not attend the protests.

The turnout was also low among the president’s fellow members of the Social Liberal Party, as well as supporters in local and state governments.

The demonstrators’ demands included the passing of the pension reform bill and the anti-crime bill pushed by the Justice minister, Sergio Moro. The most aggressive words targeted the Supreme Court and the swing votes among center-right wing members of Congress.

Organizers said last week the rallies would be held in 350 Brazilian cities, but by the end of the day there were reports of demonstrations in 156 towns, less than half the places initially promised. The protests in defense of public education on May 15 took place in 222 cities.

While political scientists and experts have been questioning since January the aptness and efficiency of the Bolsonaro administration, the demonstrators who hit the streets on Sunday claim that the far-right president has not been able to tackle the economic and institutional crisis because there is no harmony between the branches of the government, arguing that lawmakers and courts are making it harder for the president and his cabinet to effectively implement their plans.

The demonstrators shouted words of support for Bolsonaro, attacks against the vice president of Brazil, general Hamilton Mourão, and compliments to Olavo de Carvalho, known as “the guru of Bolsonarism.” A polemicist and self-educated philosopher, Carvalho is in the center of the crisis faced by the Bolsonaro government. He lives in the United States and is an outspoken critic of the members of the Brazilian military who are in the government, including the vice president, who has made statements that counter some of the president's more conservative decisions. 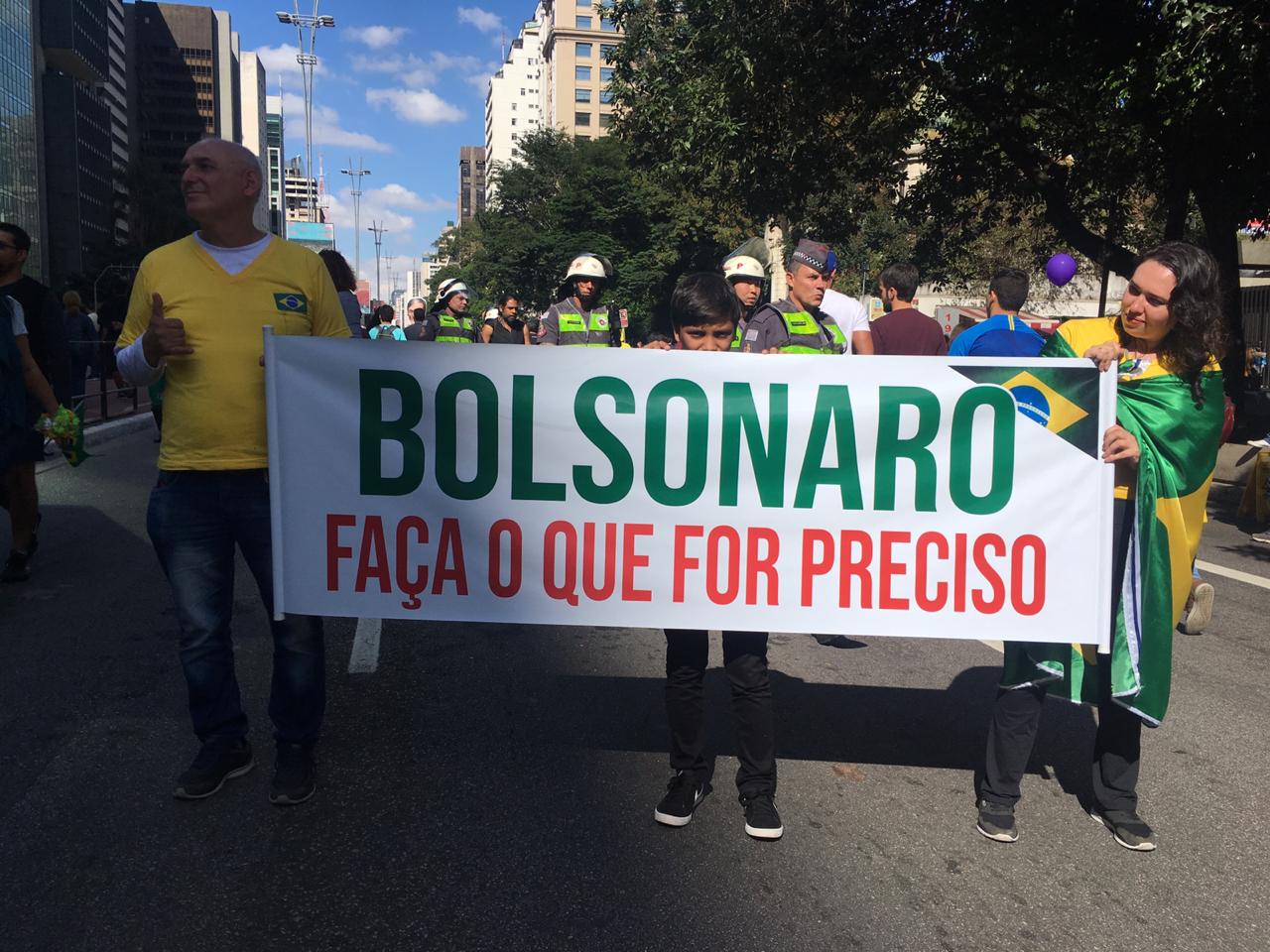 In Curitiba, in the southern state of Paraná, pro-Bolsonaro demonstrators took down a banner in support of public education that was hung outside the Federal University of Paraná during the protest against the education budget freeze.

São Paulo, Brazil’s biggest city, also saw the biggest protest of the day, where demonstrators repeatedly sang the national anthem and attacked the House speaker, congressman Rodrigo Maia. A member of the right-wing Democrats party, Maia has been involved in quarrels with Bolsonaro and Olavo de Carvalho-led Bolsonarist groups. The president’s supporters demand that his proposed bills should be quickly passed by the Congress.

Most protesters wore national team soccer jerseys, as a reference to the colors of the Brazilian national flag, while others wore black T-shirts sporting the president’s face in white, or his quotes, including the slogan of his campaign and government, “Brazil above everything, God above all.” Some even went as far as wearing the olive green colors of the military and outfits in honor of the military police.

Prayers, crosses, and scapulars were also part of the landscape at the rally in São Paulo, as well as other religious expressions. Priests made speeches in defense of “family values and morality.”