The economic relations and the effects of capitalism in agriculture and environment were the main topics at the opening panel of the “Land and Territory Seminar: Diversity and Struggle”. The event started on June 6, at the Florestan Fernandes National School, in Guararema, state of São Paulo. The event, which ended on Saturday, has united over 50 rural workers and environmental organizations, public officials, state governments representatives with a progressive agenda, intellectuals and researchers.

João Pedro Stedile, national coordinator of the Landless Workers’ Movement (MST), said during the opening panel that the main objective of contemporary capitalism is to attain vulturous profits at the expense of the over-exploitation of natural resources.

“When you set up a car factory, you expect to obtain a 13% per year profit. When you take control of a natural resource and turn it into a product, like water, for example, you have profits of over 700%. That’s what they are after,” said Stedile.

In this sense, he continued, agribusiness is another tool in capitalism’s toolbox to organize a productive model that remains under the control of international powers. In order to achieve that, there’s a great investment in the introduction of elite machinery and to drive the rural workers away from the field, he added.

The coordinator also pointed out that there’s a favorable ambience to capital’s advance over nature with the right wing governments and their neoliberal policies. He stressed that this explains the direct intervention of large multinational corporations in elections in countries loaded with national resources, such as Brazil.

Giorgio Romano Schutte, a Foreign Policies professor at the ABC’s Federal University (UFABC), who also participated at the opening panel, commented that the search for capital accumulation, at this moment, is related to the weakening of the hegemony of USA’s capitalist model. He pointed to the growth of its commercial rivals, such as China, and to the economic dispute of new markets. In his view, this intensifies the pressure for capital accumulation. “USA is trying to, by any means necessary, reorganize its hegemony and realign its allies”, he added.

According to Romano, the election of Jair Bolsonaro is a clear example of this realignment with USA, as Brazil’s president approves a myriad of measures that widen agribusiness power and favor transnational corporations – straying away even from conservative governments of other countries, who maintain a nationalist agenda.

“This government brings one contradiction after another with its anachronistic postures. Throughout the world, nationalists think about investments in infrastructure. And he doesn’t,” he stressed. 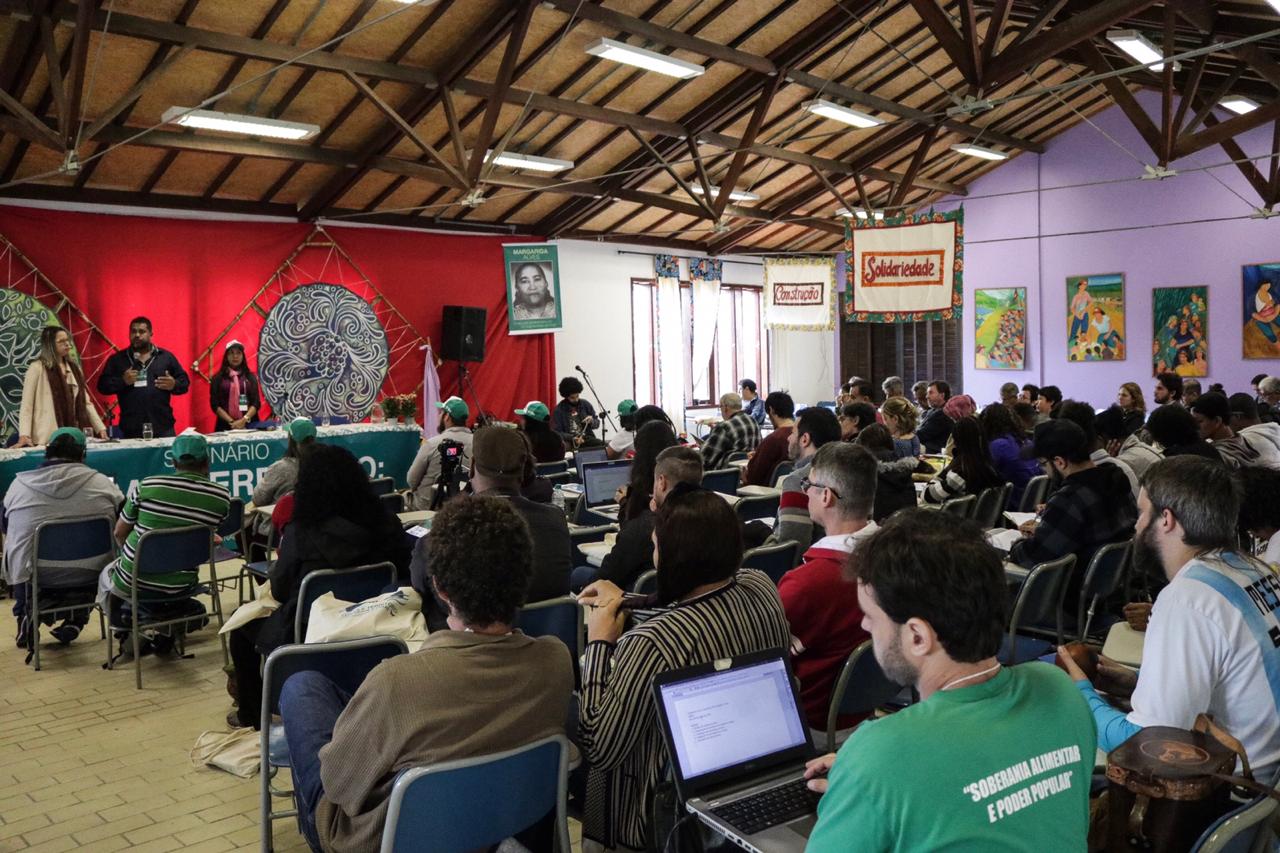 The “Land and Earth Seminar: Diversity and Struggle” was called for by the MST, in a partnership with Brazilian Agrarian Reform Association, the Managers Forum of the Northeast and Campo Unitário (a organization that unites many agrarian worker’s associations). Throughout the three days, many representatives of these people’s organizations, politicians, and environmental researchers will conduct debates that will end up with the formulation of a “Land Letter”, a political stance and a agenda that will be presented to the society as a whole.

“This seminar is an encounter of all of those who fight for the environment, agriculture and nature. The objective is to achieve unity in thinking a political program for Brazil”, said Stedile.