Not only are the socialist inclinations of these administrations clear in their discourse, but also in the real-life experiences of the Venezuelan people. This is a story about a commune where small farmers produce up to three tons of food through agroecology a month.

Caracas is a city surrounded by a mountain range, behind which there are so many hidden gems. Caribbean beaches, a German village, and also the way to the peasant communal council Hugo Chávez, on the El Junquito road.

In a 17-hectare area located between the Capital District and the state of Vargas, there are 21 families who live and grow different kinds of vegetables and raise pigs and rabbits, all through self-management.

Arlenys Colmenares, a small farmer and member of the communal council, says life is better in the countryside. “The experience has been beautiful. I usually say our lives have completely changed. Absolutely everything changed, because we learned how to appreciate the land and what it provides us,” she told Brasil de Fato.

Born in a small village on the coast of the state of Vargas, Arlenys had a small business and first visited El Junquito when her aunt invited her to spend the weekend on the lands they leased. That was 13 years ago. Arlenys never returned to her old home. She decided to bring her family to live and farm together.

Today, Arlenys’ family is part of one of the five communal councils in the area that are working to officially register as a commune. 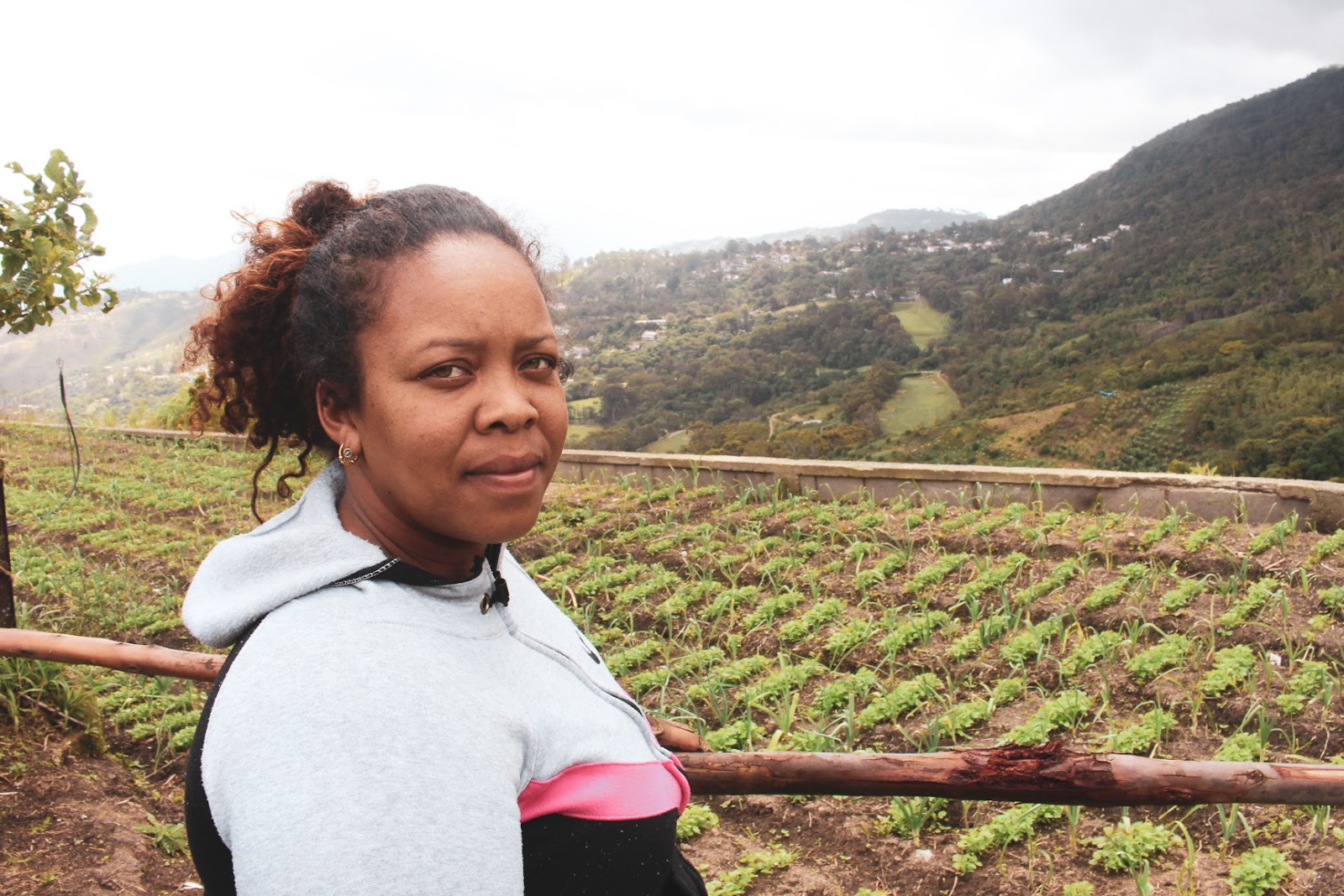 Arlenys Colmenares: “We must be united to face all the struggles along the way” | Photo: Michele de Mello

Based in an area that historically opposed the government, this collective organization has faced all sorts of acts of sabotage. The farmer says there are opposers in the communal councils who, while not letting the political debate move forward, become closer to them to have access to social programs, like receiving food from the Local Committee for Supply and Production (CLAP).

The lands where the commune is based were recovered by the farmers. Arlenys’ aunt and uncle were farmers on a land they leased from their boss. Two years later, authorities with the National Lands Institute (INTI) showed up to evict them after foreclosure.

First, the State sold the land to a company called Maricela, which did not allow the Colmenares family to keep farming. One year later, the land was sold again, this time to a state-owned enterprise, Lácteos del Alba. Arlenys and her family were then hired and learned how to manage the cattle and produce dairy products.

It was only three years later, when the state-owned company started to face financial problems, that the small farmers were able to create the peasant communal council Hugo Chávez and earn the right of possession of the property, which the INTI guaranteed.

“The idea is that the project is self-sustaining, so that we don’t depend on the State, but only on ourselves. Despite the difficulties, because it has not been easy. First because of the qualification, because, even though we were peasants and learned from other farmers, qualification is also important,” the small farmer says. 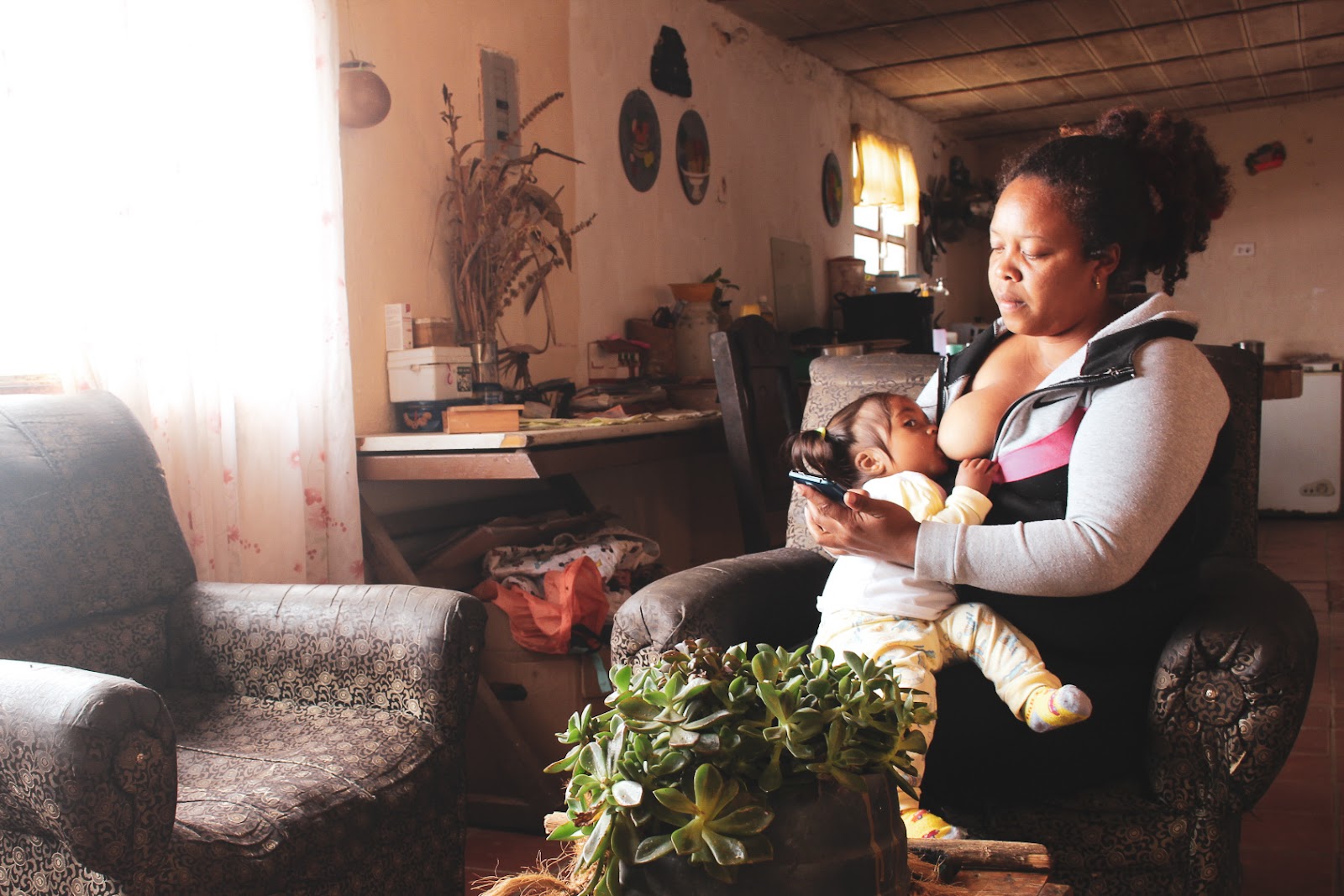 Life in the commune

“We started to investigate about poison [pesticides] and chemicals… And that’s harmful. The only thing we use is fumes and earthworms. And some traps with soap, but that’s for the pests. Eating something you grew yourself is completely different. You know that you’re cooking what you planted, that you didn’t buy anything from a grocery store, that you did that. And you’re eating healthy,” says Arlenys’ brother, Alexis Colmenares, who has been living in the peasant communal council Hugo Chávez for the past eight years.

To prevent contamination, the small farmers built low walls to keep their gardens apart from neighboring private properties. That was something they’ve learned during agroecological farming workshops held by activists with a Landless Workers’ Movement (MST) brigade in Venezuela.

About four years ago, the MST activists taught them how to produce the seeds that they are now using to grow most of their vegetables.

They also helped the commune by fixing the water pump to irrigate their gardens, which has been up and running ever since.

Arlenys feels that these things show how only solidary, collective work can help the country’s economy.

“Collective work is not easy, but we learn a lot. Supporting each other, doing something together. That’s what is important and beautiful about the communal council and the commune,” Arlenys Colmenares says. 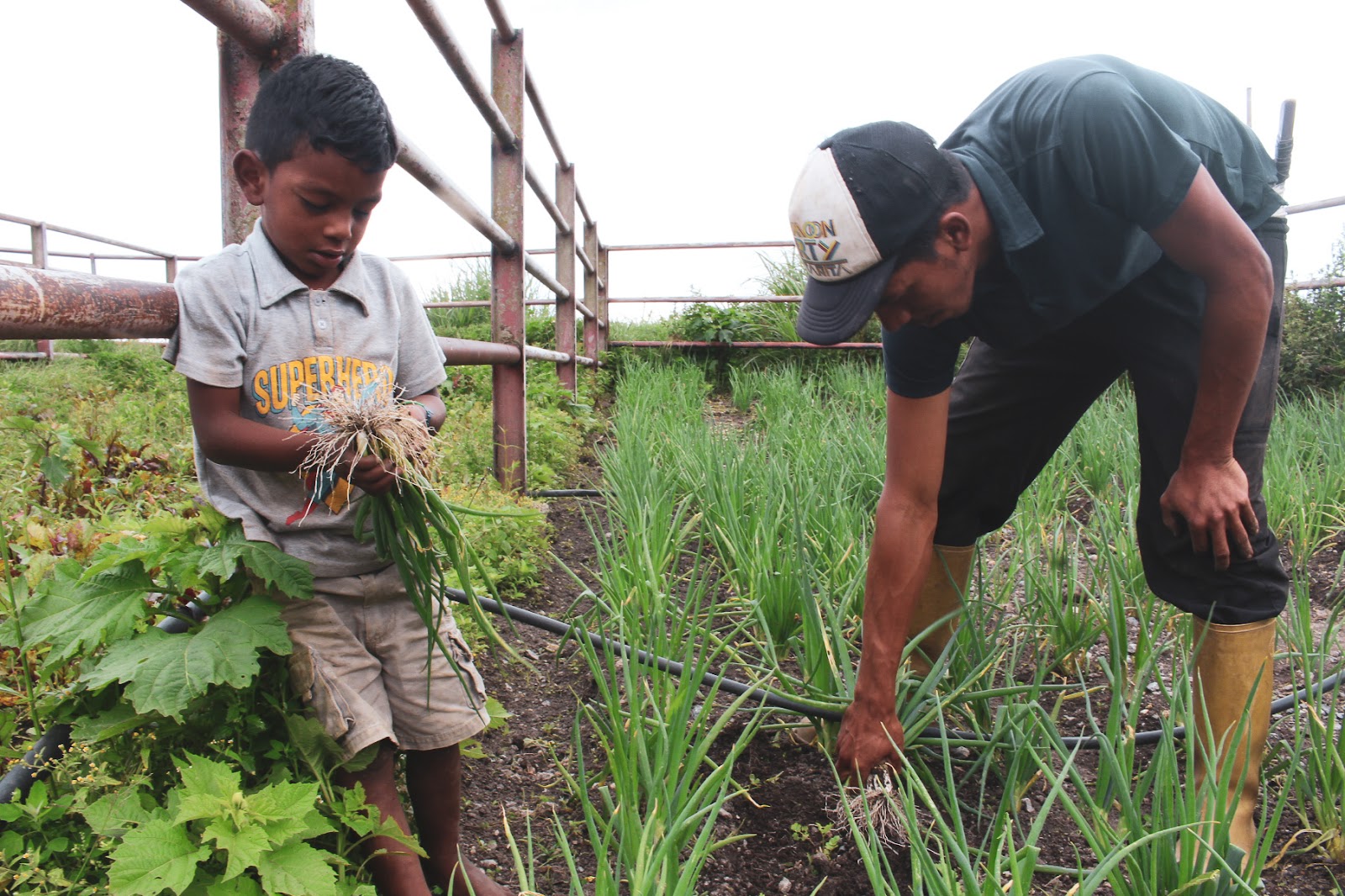 A dream, a great communal network

The communes are formed by an association of communal councils, through the organization of land and production by the people, as part of an economic model based on the common good and common ownership, inspired by communist ideals.

Currently there are 3,120 registered communes and around 48,000 registered communal councils in Venezuela. The minister of People’s Power for Communes, Blanca Eekhout, says it is necessary to further the relationship between the government and these communities.

“Sometimes it’s the State itself that breaks up the people’s forces. While there is communal production, there is no communal GDP [Gross Domestic Product]. The State has not taken on this force and does not recognize it. We haven’t been able, in this cabinet, to really map out the development and resistance of our people’s yield,” the minister says.

Not having this structure leads to flaws in the process. These problems became acuter with the economic embargo. In the case of the communal council Hugo Chávez, for the lack of transportation, the small farmers can only sell part of their produce to distributors who don’t always sell the vegetables at affordable prices in the city.

To try to tackle these issues, the farmers are once again searching for alternatives.

About five years ago, they took part in a project called “From the Countryside to the Kitchen,” which sold bags of vegetables at low prices, but as the yield decreased due to the crisis, they were not able to continue with the project.

“The embargo is making it impossible for the people to access what they produced themselves. We have to achieve a stage in which we can join forces of organization in the territories so that we can move forward in the production battle,” minister Eekhout says. 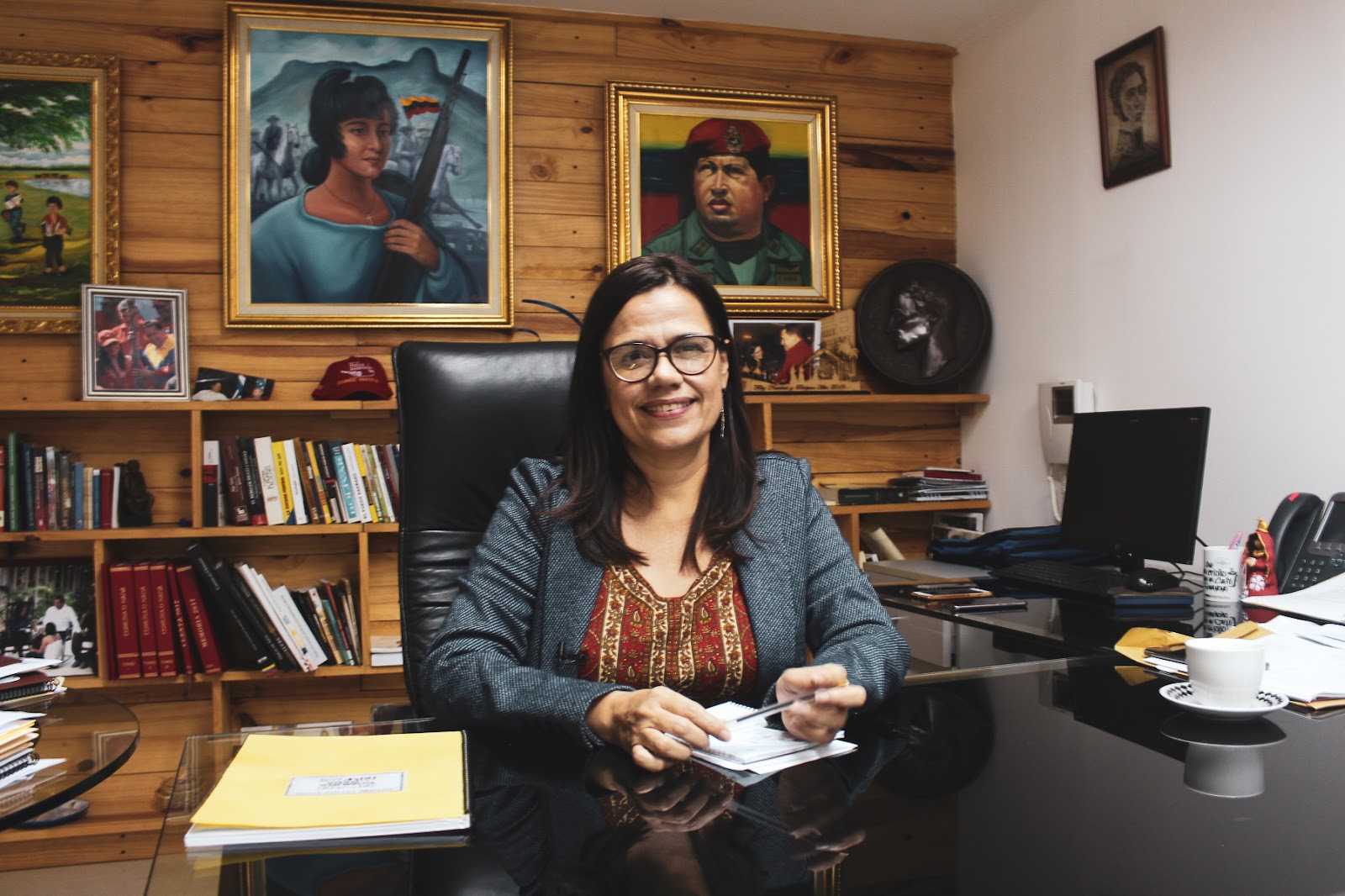 Minister of Communes Blanca Eekhout: “We have a level of organization of the revolution that allows for people’s power through the territories.” | Photo: Michele de Mello

The troubles of the economic embargo

Beyond the pressure from private organizations, which often reach out to rural producers before the State, the economic sanctions imposed by the United States are also hurting small farmers.

“We used to have a lot of animals, but the shortage of food and vitamins impacted that. Our gardens are also hurting for the lack of inputs. We used to have a tractor, but it broke, and we weren’t able to buy replacement parts, which has also impacted a lot,” Arlenys said while showing their emptied out livestock facilities. 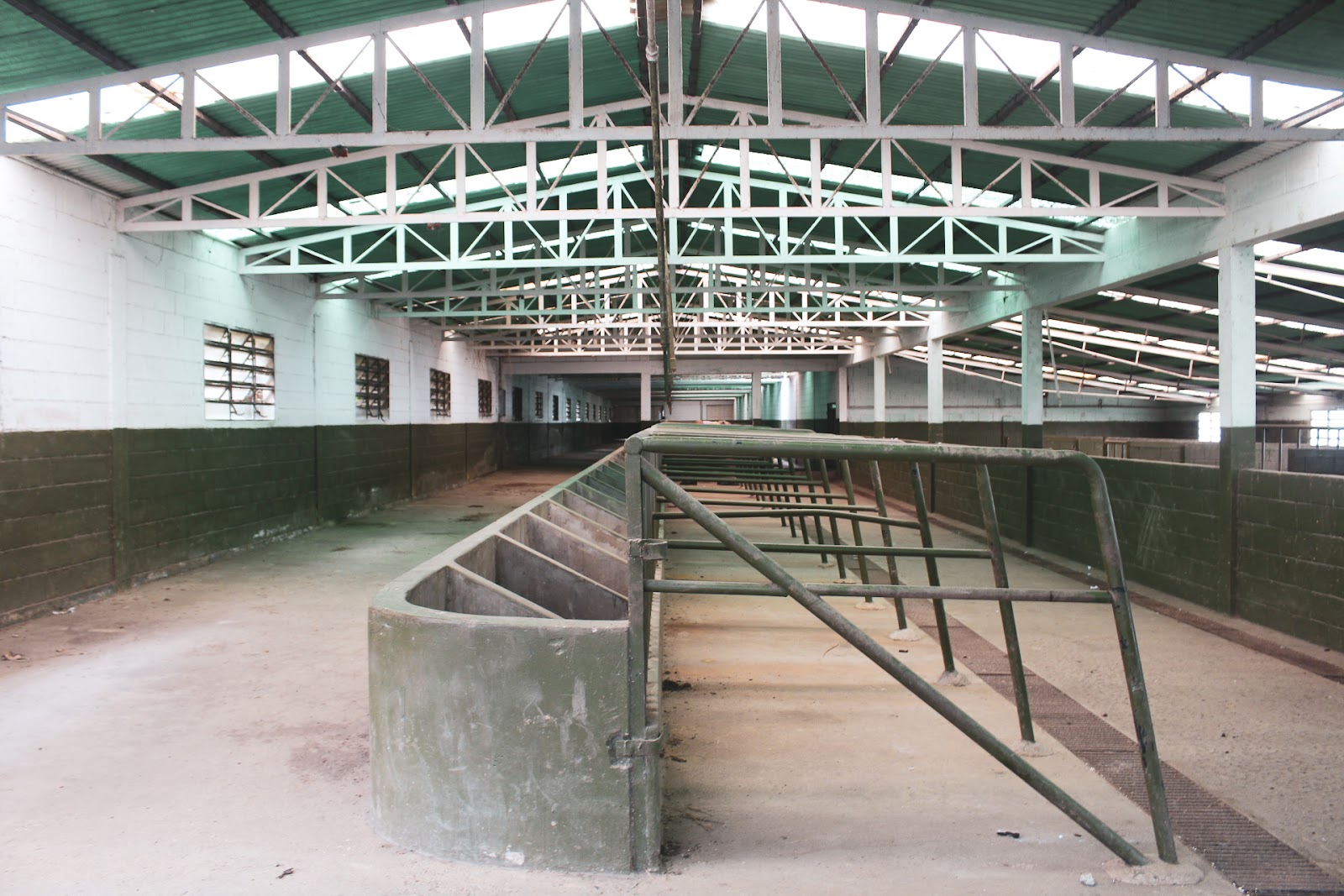 After the economic embargo, the commune was no longer able to continue to raise cattle | Photo: Michele de Mello

The minister of Communes says that the cabinet has a Production Plan for the Communal Offensive to encourage experiences that are already in place, like barter and farmers’ markets, and also to create a new legal framework to meet the demands of the self-government system.

Now the El Junquito communers are taking part in the Conuqueira Fair, in central Caracas, where 70 local farmers sell their agroecological products at a street market every first Saturday of the month.

They are also trying to find a place they can borrow in the same area of the city to sell their products every weekend so that they don’t have to depend so much on middlemen.

In August, the president of Venezuela, Nicolás Maduro, met with his ministers to kick off the so-called Production Plan for the Communal Offensive 2019, as a response to the economic warfare.

Communers who are members of the country’s Constituent National Assembly.

It's family farming that supplies food to Venezuelans, even though there are big corporations like Empresas Polar, which holds 18 percent of the packaging and distribution market that supplies primary food products for families in the country. But most of the raw materials, the minister says, come from cooperatives and companies of social production, and family production centers.

In the city of Tucaní, Mérida state, the communes produce coffee and cocoa to cater to the community, supply products for the school food program, and for the CLAP boxes.

Another example is the El Maizal commune, in the state of Lara, that supplies food to the local community and schools.

Alexis Colmenares believes that a “little push” from the State is crucial, but communes also depend on Venezuelans to grow. “A lot of people who moved away from the countryside are now coming back. They are coming back because they know life is better and less expensive here. I think there is a lack of awareness, though. Living here requires effort and dedication. If there is land, let them plant. And the government must reach out to us more, not through middlemen, but through the commune, the communal council, they should reach out directly to the land,” he argues.

The small farmer also complains about the bureaucracy. “Without so much paperwork, they [the authorities] should come and see the issues for themselves. This place here, for example, is productive, but it’s been hard to get seeds. And we have been producing seeds and we have our crops nevertheless.” 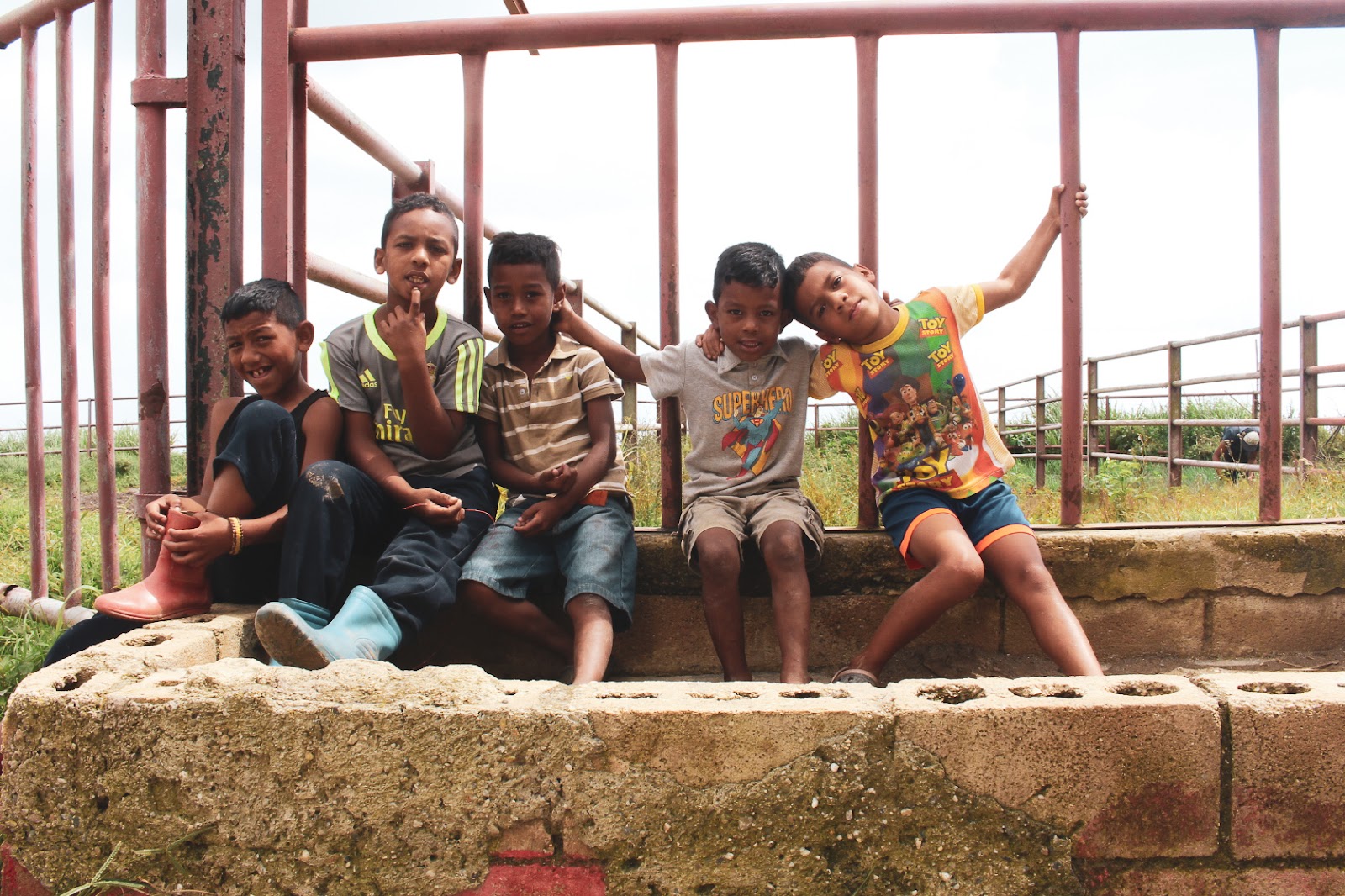 The children play freely in the 21 hectares of land | Photo: Michele de Mello

Capitalism, the challenge to overcome

One of the moves they have adopted to face the shortage of cash and the Venezuelan currency depreciation has been the communal banks. The workers created a social currency as an alternative to be able to exchange and sell their produce. While the country has around 1,500 communal banks, only half is operating.

Minister Blanca Eekhout says one of the reasons keeping the communes from moving forward is the contradictions imposed when building a socialist society over pillars that are founded in a capitalist society.

“One of the oldest prisons we have since colonial times is the monopoly. There can not be food and economic sovereignty when the monopolized power, linked to transnational corporations, continues to be hegemonic. It’s the pressure of this warfare, which pushes us to change the model and advance as we build a new communal economic network,” she claims.

This is why Chávez is still current for many Venezuelans. One of the commander’s last maxims, “Communes or Nothing” -- announced during the “change of direction” (“golpe de timón”) speech in 2012, when he presented a critique of the developments of the Bolivarian Revolution --, is still leading the way.

“We must be united to face all the battles along the way. We can’t build anything alone. We can only build with a mass of people, with your family group, your friends. This is why, together, we can take anything forward, fight whoever we have to fight. Anyone who wants to take away our peace,” the small farmer Arlenys Colmenares says.

Minister Blanca Eekhout agrees with that analysis. “It’s the people who are taking over the ownership of the means of production in their territories, and that’s a huge task to undertake, because it’s about rupturing all the schemes we’ve had before. We can only find the right path through invention. We cannot copy old models, we cannot believe that the old model will have the answers to this trade war. It’s exactly the people’s creative power that is able to withstand this war,” she argues.