More than 200 landless women protested on Friday morning outside Bayer’s headquarters in Brazil, in the south side of São Paulo, as part of the Global Climate Strike, a global mobilization to demand that actions are taken to fight climate change and protect the environment.

The members of the Landless Workers’ Movement (MST) who took part in the rally denounced the “anti-environment policy” pushed through by the president of Brazil, Jair Bolsonaro, who approved 325 pesticides in the country in nine months. The women activists argue that the president is favoring monopoly and the profit margins of multinational corporations like Bayer, which produces pesticides through its Crop Science division.

In 2018, after buying the agrochemical giant Monsanto for US$66 billion, the German company became the largest pesticide and genetically modified seed producer in the world. The company generated €39.5 billion in sales in the 2018 fiscal year.

While Monsanto has been facing scathing criticism by environmental activists in recent decades -- including the promotion of a Global Day of Action Against Monsanto --, the landless women underscore that, even though Bayer has been trying to keep its image separate from it, it has kept the toxic products of the US company it bought last year.

One of these products is RoundUp, the brand name of a glyphosate-based weedkiller that is one of the most harmful and poisonous substances to affect the environment and human beings. The chemical was classified as “probably carcinogenic” to humans by the World Health Organization in 2015.

In August 2018, Monsanto was ordered by a San Francisco jury to pay US$289 million to former groundskeeper DeWayne Johnson for causing him cancer due to long-term exposure to RoundUp.

At the time of the negotiations with Bayer, the company also lost two other lawsuits after a retiree and a couple also got cancer after using the toxic chemical. Since then, the number of lawsuits against the agrochemical giant has been on the rise, adding up to 18,400 in the United States alone.

Nevertheless, Bayer Monsanto’s net revenue increased by 45 percent in the first quarter of 2019, amounting to a US$4.67 billion EBITDA margin.

While Brazil has been approving pesticides at a fast pace, even Germany, Bayer’s home country, announced early in September that it intends to ban the use of glyphosate by the end of 2023.

By increasingly encouraging pesticide production and marketing in Brazil, the country is painting a bleak picture: 700 people reportedly died every year in the last decade as a result of direct contact with agrochemicals, according to DataSUS, a Brazilian health system database.

Between 2008 and 2017, for example, 7,267 people reportedly died due to the toxic effects, poisoning, environmental exposure, intentional self-poisoning, and other factors. More than 70 percent of these deaths happened in the Northeast and Southeast regions of Brazil.

The Amazon wildfires have also been a key aspect during the Global Climate Strike this Friday. In August alone, parts of the Amazon region were ravaged by 30,901 fires, a 196-percent increase over July.

In the same period, more than 51,000 fires were recorded across the country, a 128-percent increase over August 2018, a record high since 2010. The numbers were disclosed by Brazil’s National Institute for Space Research, which has been targeted by Bolsonaro.

In the weeks since the wildfires started, it became clear that the blazes started due to the predatory activities of big farmers in areas on the border of the Amazon territories. Several firestarters have actually insinuated that they felt encouraged by Bolsonaro’s discourse.

In Aug. 10, farmers and ranchers organized a “fire day,” coordinating a massive burnoff of trees to clear forests for pasture and soy crops. On that day, 124 fires were recorded in one city, Novo Progresso, in northern Pará state. The next day, 203 fires spread through other areas. The thick smoke traveled great distances and covered cities as far as 2,000 miles away from the Amazon region. 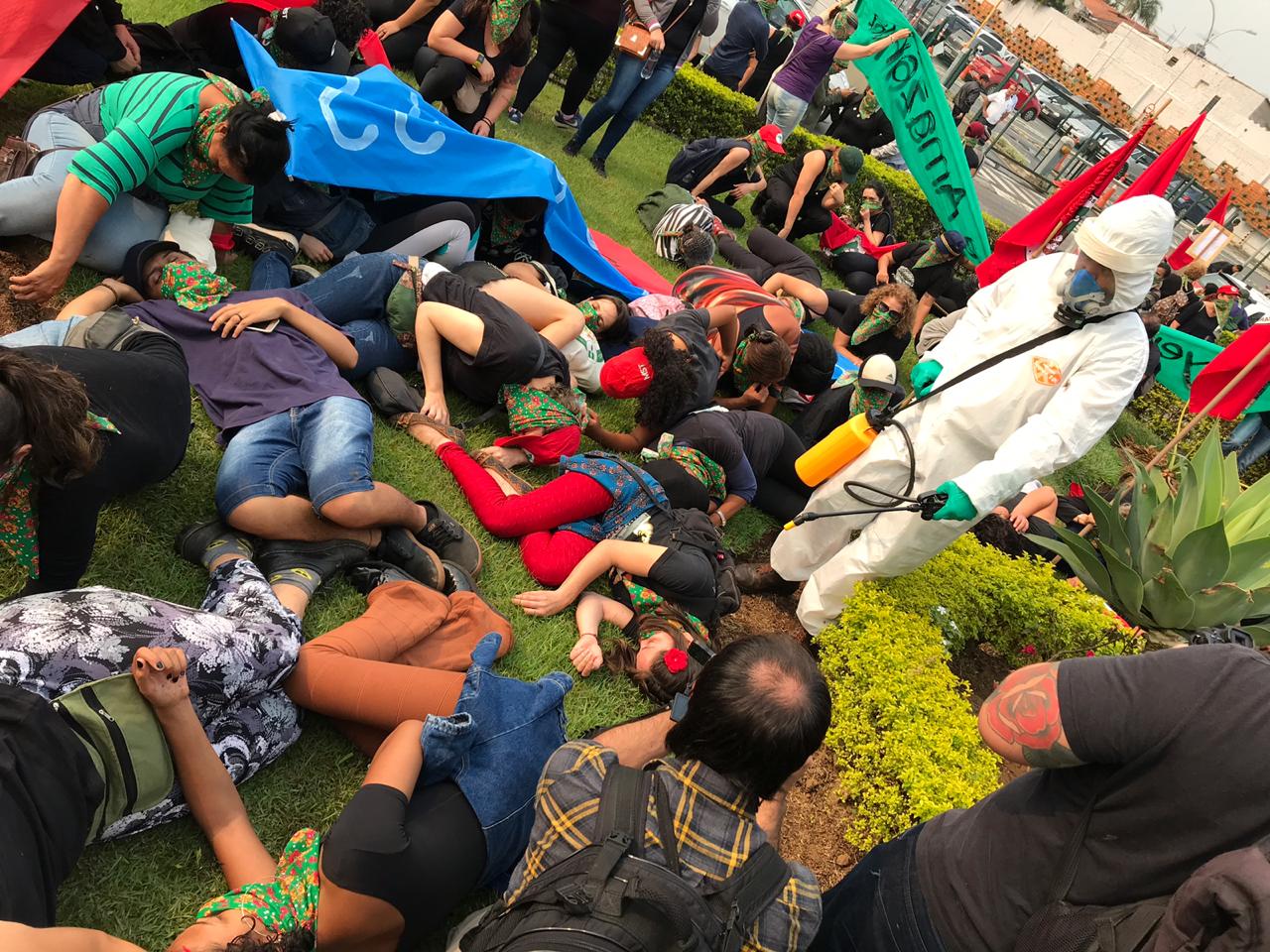 The MST released a statement in which it calls Bolsonaro the “protector of poison,” arguing that the speed approval of pesticides “shows a complete disregard for people’s health and the preservation of the environment.”

“It’s worth noting that companies such as Bayer, Basf, BRF, JBS, Bunge, Syngenta, and Cargill constitute the Brazilian agribusiness associations, the resources of which fund the Instituto Pensar Agro [IPA, an organization of agribusinesses], which in turn is the logistic engine of the FPA [the parliamentary farm caucus], the powerful farm lobby’s most important arm,” the statement reads.

In May, a report by De Olho Nos Ruralistas, a watchdog on agribusiness in Brazil, showed that, not only is Bayer the world leader in pesticide and genetically modified seed sales, but it’s also responsible for funding agribusiness and employer associations in Brazil that are members of the IPA, including Sindirações, Sindiveg, Sindan, Andef, and Abag.

Contacted by Brasil de Fato, Bayer submitted a statement saying that “the company respects the right to protest peacefully and reiterates that its products are safe and have been approved in several countries, being used by farmers all over the world.” “The company also points out it collaborates to many different advances in innovation,” the statement reads.