The Bolivian seamstress Nancy Salva walks down Paulista Avenue, a busy road in an upscale area of São Paulo, Brazil. She stops outside a designer label store. A dress in the window looks familiar. She suddenly realizes: she sewed that piece. She is even more surprised when she spots the price tag. The dress is R$400 (roughly US$100), fifty times more than what she received for the job.

Nancy moved to São Paulo ten years ago with her son Raí, who is now 17 years old. That seemingly simple moment outside the store in one of the city’s most important avenues changed forever the way she sees her own work. In the run-up to the presidential elections in her home country, which will be held on Oct. 20, the 43-year-old seamstress embodies the social change that Brazil and Bolivia have experienced in recent decades.

Last Sunday, Oct. 13, Nancy took a bus back to her homeland. She is expected to arrive on Tuesday, Oct. 15, five days before the general elections. She can’t vote from São Paulo because the voter registration deadline with the consulate passed when she was visiting Bolivia.

Nancy’s family lives in a rural community northwest of the Bolivian capital, La Paz. Before 2008, they didn’t have piped water supply or electricity, and they had very limited access to basic services in the countryside. In urban areas, indigenous people were not allowed to have specific jobs, and signs of extreme poverty were found in every corner.

The seamstress recalls that she took to the streets with her neighbors to protest against the then president Gonzalo Sánchez de Lozada (2002-2003), who resigned after 14 months in office amid fierce demonstrations, and became known for handing over the country’s natural resources to foreign nations. The protesters believed that Evo Morales, a cocalero (coca grower) leader who came second in the 2002 presidential election, was their hope for better days. In the following elections, held in 2005, the indigenous politician finally won the presidency.

Today, the village where Nancy’s family lives has water on tap, the houses have electric power, and the internet has replaced the San Gabriel radio station -- with Aymara- and Quechua-language programming -- as their primary source of information. Meanwhile, access to broadband internet and WhatsApp messaging services have impacted the once unanimous support for Morales in the community.

Bolivia has a population of approximately 11 million, and more than 10 million fixed and mobile internet access points, a scenario that opens the way for “fake news” to spread and make this 2019 election process unlike any of the past three presidential races that Morales won.

“Two years ago, I visited Bolivia for three months. I spent two entire months in rural areas, and at the meetings we had there, there were a lot of young leaders with a different line of thought. They argue that, if he [Morales] continues in office, we’ll have the same future as Venezuela,” the seamstress says, recalling that she heard similar arguments in Brazil during the 2018 presidential elections. Of the 6.9 million people expected to vote in Bolivia, nearly 3 million are 18 to 25 years old.

Nancy moved away from her country for a number of reasons. Fleeing from domestic violence and low wages in Bolivia, she dreamed of seeing the citiscapes she only knew from TV. “I also wanted to come to Brazil because I would watch Brazilian soap operas in Bolivia, showing parts of Rio, and it was beautiful.”

After going to technical high school and graduating in statistics, she worked for a socio-economic survey agency. For nine months before she emigrated, she worked for an export company doing business in Chile and Peru ports -- Bolivia is a landlocked country. When a friend’s brother mentioned the possibility of working for a sewing workshop in Brazil, she didn’t think that it was manual labor -- oficina, the Portuguese word for workshop, means office in Spanish.

The first shock came just after she crossed the border, in the city of Corumbá, Mato Grosso do Sul. All the money she saved in Bolivia was exchanged to 10 Brazilian reais. “I couldn’t eat the entire ride to São Paulo. I couldn’t afford to have lunch.”

The economic changes both countries experienced are still seen in their currency rates. Between 2005 and 2018, Bolivia’s Gross Domestic Product (GDP) grew at rates higher than 4 percent. In the same period, Brazil strengthened its currency and recorded a GDP growth rate as high as 7.5 percent in 2010, but a recession in the past three years have pushed the dollar up against the real -- one dollar is now more than 4 reais.

“One real was almost three bolivianos. Working here to send money to Bolivia made sense. Even the dollar rates were good,” Nancy says. “When Dilma [Rousseff] was president, one real was 2.70 bolivianos. Then [Michel] Temer took office, and this government pushed the real lower, to two bolivianos. Now one real is 1.60 boliviano.”

Arriving in São Paulo was also a traumatic experience. The person in charge of the workshop took Nancy from the bus station to Bom Retiro, the neighborhood where she would work, and introduced her to her new room: an out-of-service bathroom with a bed where the toilet used to be. “This is where you’ll sleep,” she was told. Across a narrow hallway was her working area -- a renovated garage. “When I first got there, there were four single people and six couples. There were children too… It was hard for me.” All of them were Bolivian.

Nancy’s workday started at 7 a.m. and ended at 10 p.m. She was allowed to take short meal breaks and made R$300 a month. She finally paid what she owed her employer for the bus ticket and food the following year, and started to receive a production-based pay, eventually being able to get her papers. 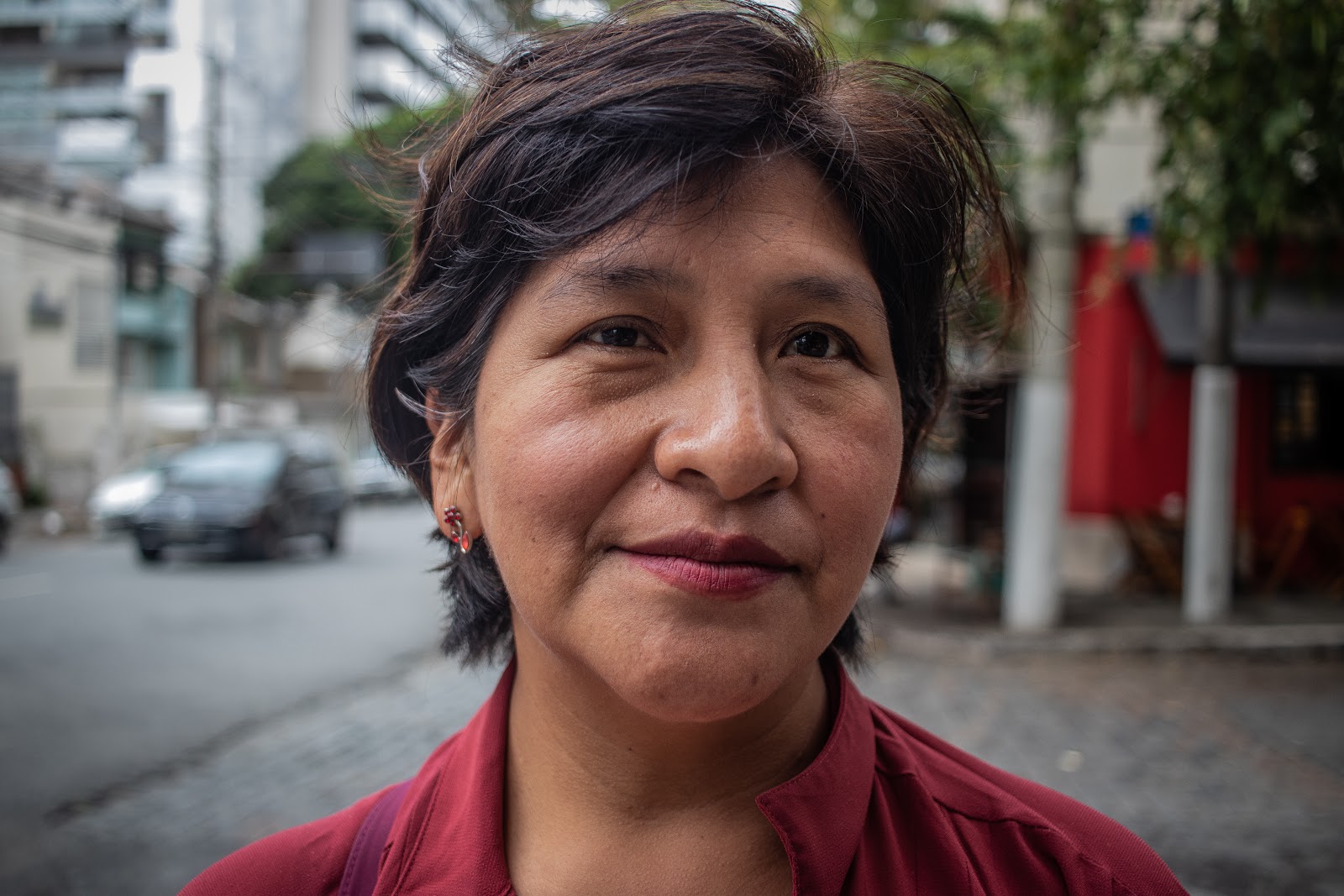 While Nancy Salva has been able to settle in Brazil, she has plans to return to her home country | Photo: José Eduardo Bernardes/Brasil de Fato

Since then, Nancy has only visited her home town twice. El Alto is the second most populous city in Bolivia, in the La Paz department. She currently lives in the Casa Verde neighborhood in the north side of São Paulo, working “for herself.” Even though her workday is not established by an employer, she works “almost as much” as she used to in order to pay her bills -- her earnings are dependent on her production. On average, she is able to deliver one hundred pieces every three days.

Before the episode when she spotted the dress she made displayed in a store window, Nancy’s shared experiences with other Bolivian migrant women was already helping her become more politically aware. One of her colleagues had once invited her to attend a lecture held by the Brazilian Association of Textile Retail (ABVTEX), where Nancy heard the names of brands involved in slave labor. “I worked for three years for one of those brands, and they paid me R$0.50 [for each piece of clothing],” she said.

In her first few years working in Brazil, the labels Nancy sewed to the pieces she produced didn’t include the name of the manufacturer, only raw material information. As she started to understand the dark side of the fashion industry, she started to look up online about the production chain and eventually realized her own condition in all that.

“People who work in sweatshops can’t even choose what to eat, or how many hours they will work, because we have to eat what they give us,” she says. The times she dared to state that her work conditions resembled slavery, her employer would reply: “You are not black, your legs are not chained.”

As her son grew up, the owners of the sweatshop refused to provide food for him. One of her employers actually asked him to work in the shop’s kitchen peeling potatoes. Nancy refused the offer and quit her job -- with nothing but R$800 to pay rent for a room for two people.

A few days later, looking for a new job, she found an ad at a grocery store offering free Portuguese language classes. That’s when she first met the Migrant Support Center and Pastoral Commission (Cami), in 2014.

Nancy not only learned Brazil’s official language, but she also became a volunteer in a sharing circle project for immigrants that worked in ten São Paulo neighborhoods. “We would talk about self-esteem, violence, reproductive health, and we would also talk about the political situation in Brazil and Bolivia.”

Jair Bolsonaro’s victory at the ballot box in 2018 in Brazil helped to consolidate an agenda that directly impacts Nancy’s life: setbacks for labor rights, rising informal employment, attacks against state services that fight and prevent slave-like practices, and an aggressive rhetoric against women.

But the seamstress also has concerns about the Bolivian government, as news comes through about corruption in the country’s institutions. She says she does not agree with the court decision that allowed Evo Morales to run for a fourth term, even though a referendum had gone against it. Nevertheless, she supports the indigenous president and presidential candidate.

“Despite all that, the MAS [Movement toward Socialism], Evo’s party, has the most projects for communities, for the youth. [Opposers Carlos] Mesa and [Óscar] Ortiz’ group doesn’t have projects like that. They’re all about hate speech, and that is confusing for people.”

Most Bolivian immigrants living in Brazil voted for Morales in the last elections. In the referendum about whether the current president could run for the fourth time, however, most of them rejected the bid.

Facing so many uncertainties for the future, Nancy looks back at the past and ponders over the future of her home country. “Today the minimum wage is much higher, and indigenous people can find jobs in the city, but they lack qualification and training. That has to change. But what’s the price of putting someone else in office?”

The seamstress fears that, if the opposition wins the election, the first few years of government could be -- like in Brazil -- a wave of setbacks against policies implemented by previous administrations, halting the advancements in social projects.

In her personal life, Nancy also has more questions than answers. Her son Raí wants to go to medical school in Bolivia, because college in Brazil has become increasingly expensive -- the Bolsonaro administration is even debating whether public federal universities should be free. If Raí passes the entrance exam, she is considering moving back to her community in El Alto, where she estimates 40 percent of voters support Morales.

Amid the desire for change and the fear of recession, approximately 7 million Bolivians will vote on Oct. 20th.