The theme of the first discussion panel of the “Peoples’ BRICS” Summit was “Imperialism, International Geopolitics, Role of BRICS and the People.” It took place on Monday morning, Nov. 11, when panelists talked about how movements must take collective efforts internationally, concurrently with official relations between the States.

The meeting is an alternative event to the BRICS Summit, taking place in Brasília on Nov. 11 and 12, before the official BRICS Summit that will begin on Nov. 13 in the capital of Brazil.

The panelists who joined the event this morning spoke about how the political dynamics in each country impact the BRICS — the association of Brazil, Russia, India, China, and South Africa. On the one hand, the bloc tried to explore the gaps in the global hegemony of the United States and the European Union, but, on the other, it maintained the capitalist development paradigm intact.

The rule of far-right governments in Brazil and India are seen as obstacles to the consolidation of the bloc.

The Russian journalist Konstantin Syomin said that the global scenario shows “great apathy” and the “depoliticization of the masses,” which results in many forms of social unrest.

Pointing out that there must be “international solidarity” between the people of different countries, Syomin said this apathy will not last forever, as capitalism is a system that produces negative effects, including war.

“The contradictions are evolving fast within and between societies. What we are witnessing now is not a series of isolated cataclysms, but a profound crisis in the global capitalist system as a whole. ‘The world has changed, there is no proletariat anymore.’ How many times have we heard this? The world may seem different now, but the foundations of capitalism remain intact,” he said.

Another panelist, the Indian journalist Prasanth Radhakrishnan agreed with that line of thought. Looking back in history, he pointed out that post-World War II international capitalism offered proposals, but that attitude changed after the 1970s and 1980s, and even more in the 1990s.

“Imperialism has been showing more and more that it is unable to present a constructive project. More and more, imperialism shows that it believes it is ok to destroy a country,” Radhakrishnan said, mentioning recent cases such as Libya, Iraq, and Afghanistan. 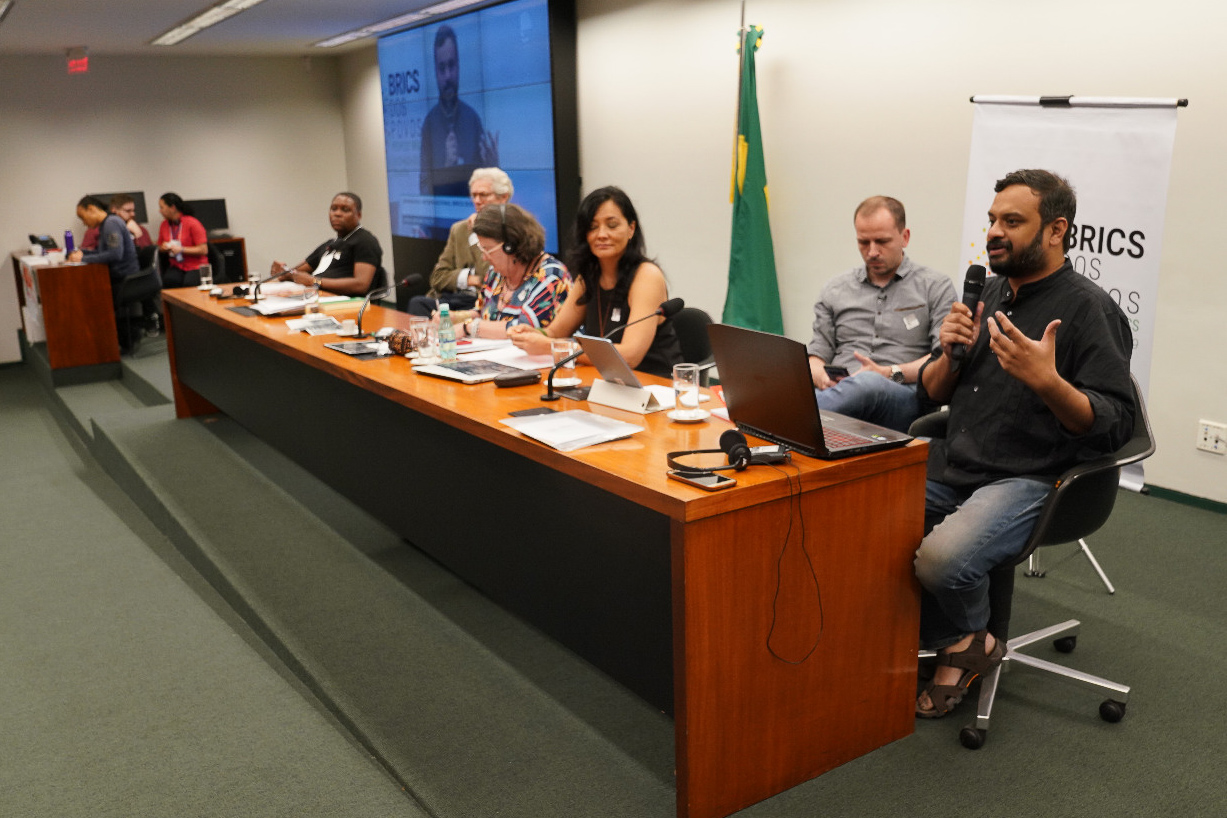 Professor Monica Bruckmann, of the Federal University of Rio de Janeiro, pointed out the role that China has been playing internationally, a process that represents the rising participation of Asian countries in the global economy, to the detriment of the so-called “core countries.”

In this sense, those who advocate for a “neoliberal agenda 2.0,” especially in Latin America, are becoming more and more politically inefficient and aggressive in their attempts to find solutions for them. “Right-wing forces are becoming increasingly nervous and desperate. Yesterday's events in Bolivia mean that old-style military coups are back,” professor Bruckmann said.

This way, the expert argued, as the BRICS become weaker due to the far-right reactions that took over the Brazilian government, political efforts must be taken on a different level.

“Right now, we are gathered in a crucial space, in which the integration between the peoples is a key element. It is not just an element of resistance, but also of maintaining this agenda and this vision. The main challenge is to think about what strategies — from the people — can create an impact, knowing that we are facing right-wing forces that are becoming demoralized,” she said.

Mbuso Ngubane, a member of the National Union of Metalworkers of South Africa (Numsa), said that the BRICS group has never operated to change the logic of an organization focused on “capitalist accumulation.”

“If we must fight for the destruction of imperialism, we must take to the streets in every corner of this world. Unity between the working and peasant class is the only force capable of stopping the current, rapid march that can destroy us all,” he said.

Paulo Nogueira Batista Junior, a former vice president of the BRICS Development Bank, also spoke as a panelist this morning, and said that the political change in Brazil meant the adoption of a new foreign policy, which has led the country to become a minor player in the BRICS group.