It’s almost 7:30 p.m. at a God is Love Pentecostal Church in downtown São Paulo. A torrential rain made it difficult for many believers to arrive on time. Before the service starts and the brothers and sisters come in, 36-year-old Serafina Ribeiro goes around the room getting things clean and tidy and smiling at those who walk into the venue.

A domestic worker, Ribeiro has joined the church four years ago, after she fell into depression following her mother’s death. She had come to São Paulo to work and live at her bosses’ home, moving away from her mom, who stayed in Bahia, many hundreds of miles away, in the northeast of Brazil. At church, she says she felt “the love of God,” stopped feeling anguished, and now feels she is “cured.”

Ribeiro is the face of Brazilian evangelical Christians: woman, black, low-income. At the relatively small venue -- if compared to the Universal Church’s pharaonic Temple of Solomon --, most churchgoers corroborate the data provided by a survey disclosed in January 2020 by the Datafolha polling institute about the demographics of Evangelical believers: black women who earn up to two minimum wages a month and have secondary education.

It’s a very different background from that of evangelical leaders who decide to go into politics, whether behind the scenes or in the limelight.

One example is bishop Edir Macedo, the leader of the Universal Church of the Kingdom of God, first established in Rio de Janeiro in 1977, on the land of an old funeral home. Macedo’s net worth in 2015 was estimated US$1.1 billion, according to Forbes Magazine. As he endorsed the presidential campaign of Jair Bolsonaro in the 2018 elections, nearly 70 percent of Evangelical Christians voted for the blessed far-right candidate.

Evangelicals have been engaged in Brazilian politics for a long time, but their participation has increased exponentially. Since 1982, the number of members of parliament who identify as Evangelical Christians surged from 12 to 90, according to the parliamentary press office of Brazilian unions (DIAP). The numbers are partially explained by the growth of Evangelical Brazilians, from 7.8 million to 26.2 million in the same period. But that’s not the only reason why they have become a greater political force. 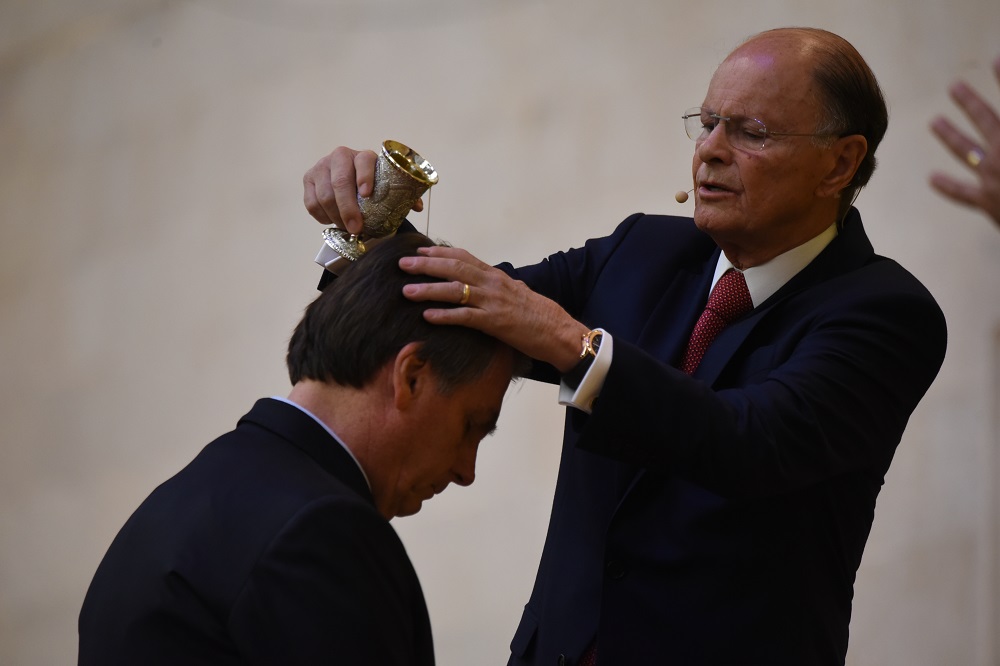 A project of power

Experts and Evangelical Christians interviewed by **Brasil de Fato** explain that the growing participation of Evangelicals in politics is part of a project aiming at increasing their power, encouraged by religious leaders aligned with the Brazilian right.

“With the Evangelical growth, many more people will go into partisan politics. That’s normal and expected. With the Universal Church, however, that changed,” said 64-year-old pastor Ariovaldo Ramos, the leader of the Renewed Christian Community and one of the national coordinators of the Evangelicals’ Front for a Rules-Based Democracy, established in 2016. Ramos believes that Edir Macedo’s church has become a “political agency” that operates based on the idea of rising to power.

In 2008, bishop Macedo published the book *Plano de Poder* (“Plan for Power”), quoting Machiavelli and portraying God as a statesman and Adam and Eve as elements of a natural or savage state. “Christians must awaken at dawn,” he writes. “Emancipation starts with individual improvement, nonconformity with certain situations, the consensus about an ideal, and general mobilization.”

Ten years later, in the 2018 elections, his plan for power was in full force: it was the ministers, supported by right-wing candidates, who brought part of Brazilian society to the streets, pastor Ariovaldo Ramos believes. And it was the right-wing and far-right political parties that took the best advantage of the growth of Evangelicals in the country.

“It’s the fastest-growing religion in Brazil and Latin America, and it’s very easy to link it to this right-wing project that address morality and conservatism,” says Andrea Dip, a journalist and author of *Em nome de quem?: A bancada evangélica e seu projeto de poder* (“In the name of whom? The Evangelical caucus and its project for power”).

As part of her investigation for the book, in 2015, Dip attended an Evangelical service at Brazil’s Congress, when Dilma Rousseff was still president. “Before that, I didn’t know that Evangelical services took place there. Eduardo Cunha [then speaker of the lower house and one of the operators of the impeachment proceedings against Rousseff] was there, praying, holding a Bible in his hand. That’s when I realized that there was a project for power being devised,” Dip says. Evangelical and right-wing values came together and created the necessary sauce to develop that project.

Pastor Ariovaldo Ramos points out that Evangelical Christians have been engaged in partisan politics since the end of the military dictatorship in the country, in 1985, but Evangelical churches tended to stand clear of partisan struggles. “It was never part of the Evangelical logic to seize power or have a political influence. Actually, the Protestant faith was very active in building a secular State,” he says.

But over time, they started to realize that having power was a way to promote their faith, “especially because of the persecution against them.” With the rise of prosperity theology, Ramos explains, that change became inevitable. Now, “if you are chosen by God, you have financial prosperity. That became a pillar that you hear in the message of the Universal Church and all Neopentecostal Churches. That’s the ‘serpent’s egg' that created the environment we have today.” 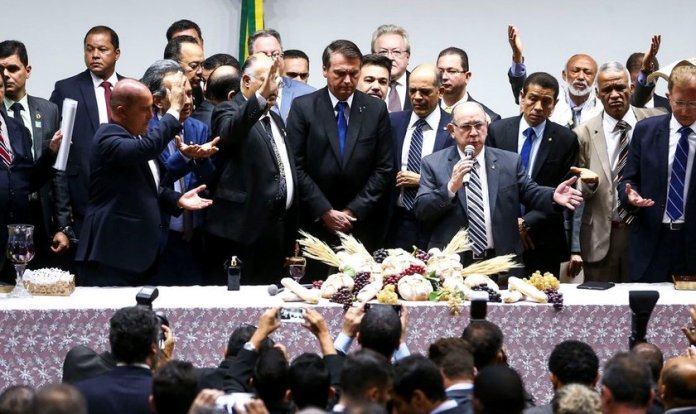 Why is the number of Evangelicals growing so fast?

Marco Fernandes, a doctor of psychology and researcher with the Tricontinental: Institute for Social Research, says that, in order to understand what led to such a surge in the number of Evangelicals in Brazil, it is necessary to look into the changes that took place in Brazilian society in recent decades when it comes to the worsening of the quality of life of the working class.

“What did the churches offer people who were facing that? First, the possibility of belonging to a community. Churches are like a cultural center on the outskirts. If a young person wants to learn how to play a musical instrument, for example, they go to the Universal Church of the Kingdom of God,” he says, where they offer around 15 social programs to believers. According to official data from 2018 disclosed by the UCKG, nearly 10.8 million people had access to these programs.

Another aspect mentioned by the researcher is the emotional support provided by these places. A study conducted by Brazil’s National Association of Occupational Medicine, mental health issues were among the main causes of absence from work in 2017.

“Where are these workers finding relief? At church. And they really do get better from depression, anxiety. It’s the churches that are helping cure alcoholism in working-class communities today,” Fernandes says, adding that it’s also where “they find financial relief, even if it’s just by getting food at the end of the month.”

Fernandes believes that Evangelical institutions end up organizing life in society, especially in places where the State is not reaching, like communities on the outskirts.

And while Evangelical religions expand around the country, Catholicism, Brazil’s largest religion, is losing ground. According to pollster Datafolha, while Catholics make up 50 percent of Brazilians today, they were 90 percent in 1980.

That trend, according to Fernandes, can be explained because the penetration of Evangelical churches in the working class is better, as the rhetoric and the rituals are closer to the communities’ reality than those of the Catholic Church.

While the Catholic masses were conducted in Latin with the priest facing away until the 1960s, Evangelicals spread their message through music, TV and radio channels, and at small houses that they can turn into temples across low-income communities.

Rachel Daniel, a 24-year-old Evangelical social educator, says that the Evangelical Church welcomes people “perfectly.” “You are hugged, you feel welcome, people are concerned about whether you have food at home, about your health, they call you on your birthday,” she says.

“Black women who live on the outskirts don’t have access to culture, health, and education. That’s where the Church offers health, culture, and education. Their children can learn how to play an instrument, they take acting classes. They can get a doctor’s appointment, they can get medicine. Everything the State doesn’t offer them, the Church does.”

The majority of Evangelical Christians in the country are women, black, and low-income Brazilians, according to pollster Datafolha | Rovena Rosa/Agência Brasil

The left didn’t do their homework

“The left didn’t listen to Paulo Freire, they didn’t teach people to write using bricks and building cement, which is what Paulo Freire taught us about a liberating education. The grassroots communities were unattended and eventually became religious communities,” Ariovaldo Ramos argues.

The pastor says that the mistake of left-wing forces was to forget the fact that “below the Equator, we are all religious people.” “Everyone says ‘thank God.’ To believe that everyone would leave religion behind as they gained economic dignity is misguided. Faith is something much deeper, it’s a way to see life.”

Ramos says that, as long as the left does not tackle the dignity of black men and women, it will continue to lose votes to any movement that “lends the poor, the black, and the miserable a sense of dignity, which has nothing to do with the money they have in their pocket. What they will not accept is to be treated as slaves.”

The Evangelical educator Rachel Daniel has a similar argument. “You can’t tell a 90-year-old lady who goes to my church, ‘I know that the minister took you to the doctor when you needed, talked to you when you needed, and visited your son in prison, but he is wrong, vote for someone else.’ That’s about forging affectional bonds. Politics is about affection and relationship, and so is religion. The left stopped doing that, and the right used those ministers.”