It was Wednesday, around 4pm, on the 17th of April 1996. Around fifteen hundred people were at the “curva do S” encampment, in Eldorado do Carajás, southeastern region of the state of Pará, in the north of Brasil, as part of a protest. Their goal was to march to the state capital, Belém, to get the paper work to be able to settle on the Macaxeira Farm, at the time occupied by 3,500 landless families.

The march that began April 10th was stopped with blood, shed because of an attack by military police. The incident became known worldwide as the Eldorado do Carajás Massacre. A total of 155 officers were involved in the operation that killed 21 rural workers, 19 at the scene and two who later died at the hospital.

For many of the families whose lives were changed by the killings, the struggle didn’t end with the massacre. Polliane Soares is part of the Pará state leadership of the Landless Rural Workers Movement (MST). On that fateful day, she was 11 years old, and marching on the highway alongside her family toward Belém, to fight for their land rights.

“I remember on the day of the massacre, I was in town with my mom, who worked as a teacher in Eldorado. At some point during the night, I think around 8pm, the electricity went out. When the blackout happened word started spreading that the murders had happened, that the landless had been killed and my mom – since her brother was there – became desperate”.

By nightfall, the crime had already been committed. With no power in the city, in total darkness and unable to communicate with anyone, mother and daughter could not sleep. The following day, bright and early, they went to “curva do S”.

“When we got there, I remember there was a lot, a lot of blood on the highway. It was a powerful scene of destruction. The signs of what happened were everywhere, many things left behind”, she says. 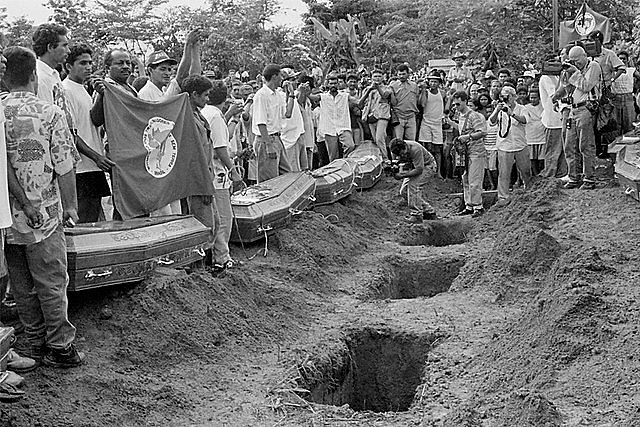 Police operation killed 21 landless farmers and injured more than 60 in Eldorado dos Carajás in 1996, but 153 officers were acquitted / Amnesty International

In the month prior to the massacre, on march 5th 1996, the families had occupied the Macaxeira farm – in Curionópolis, a neighboring county to Eldorado – seeking to negotiate with the National Institute for Colonization and Land Reform (Incra), and begin the resettlement process for the unproductive land. Being ignored and having received naught but broken promises, the peasants decided to protest in the state capital.

The march left from Curionópolis and intended on going through Eldorado do Carajás and Marabá, before getting to Belém. Those who lived that day, or saw the images on television witnessed the violence that met the landless families at Eldorado. The recordings show bloodied people running around the dirt, gunshots, blood and despair. The aggression lasted for about two hours.

The farmers were surrounded. On one side by policemen from the Parauapebas barracks, on the other by the Marabá battalion. Out of the nineteen assassinated, 8 were killed with their own work tools: pick axes and machetes, another 11 showered with 37 bullets, an average of four shots per person. Another 79 were injured. Two later died at the hospital.

The police killed the peasants with shots to the neck and forehead – a clear sign of executions. One had his head crushed. 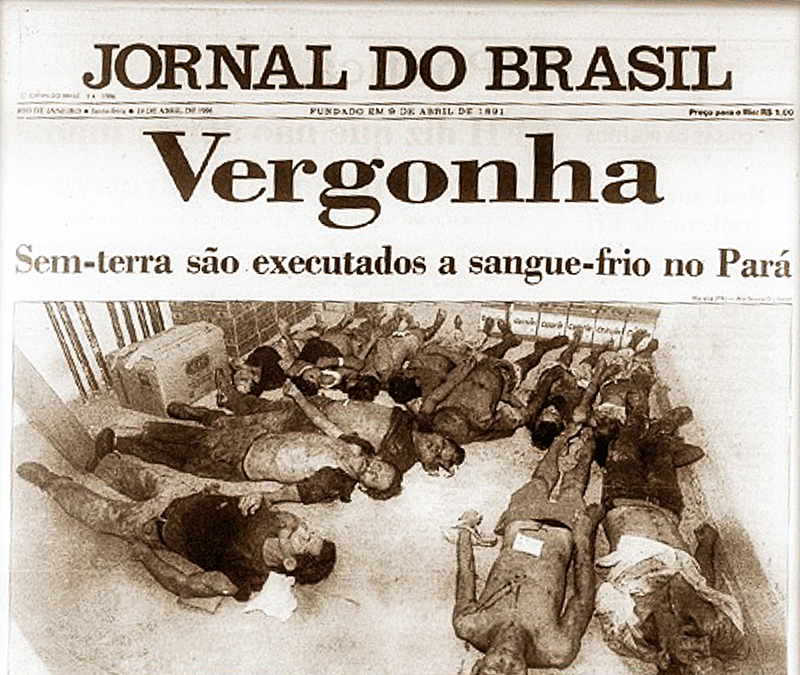 For professor and local head of MST Pará, Batista Nascimento Silva, who lives on the Lourival Santana settlement, there is no other definition for what happened other than cowardice. When the rural workers became surrounded by the police, Batista was on the highway.

“When officers arrived and disembarked on the Marabá side they started tossing stun bombs and shooting, the police on the opposite Eldorado side began doing the same against us as they approached. The protesters, upon noticing one of their own had fallen after being shot, charged at the military throwing sticks and stones, in an attempt to push the officers back, but they closed in even more and kept shooting”, he recounts.

To protect himself, Batista crossed over the highway seeking refuge. “I couldn’t get far, there was too much brush. I turned back, crossed over ducking, there were lots of people on the ground and I was able to make it to a house on the other side. I stayed there for a few moments and saw lots of comrades that had been shot. There was an enclosure on the property so I pushed in the door because I wanted to hide inside and there, many people were on the floor, women, children, old and young”.

After a few hours hiding, at night time, Batista found his mother and three brothers, his little sister was only located the following day. His father was in town that evening and wasn’t allowed to return. “After the incident we stayed at that spot for two days, we had nowhere to go, and only left once the bodies were released for burial”.

Out of the ‘55 policemen at the scene that day, only the commanders of the operation were ever charged and are serving sentences, one in house arrest. The other 153 were cleared, though many of the officers present had weapons that were taken out of precincts without registration, which is prohibited.

After the massacre, April 17th became known as the international Day of Peasants’ Struggle or Land Day. The Macaxeira farm, whose owner was one of the people behind the crime, was appropriated and became the April 17th Settlemet.

The local where the massacre took place is nowadays considered sacred by the MST movement. “The monument of the burnt cashew trees” is comprised of dead trees, one for each life that was taken. At the center there is an altar with the names of the fallen, "in their honor”. 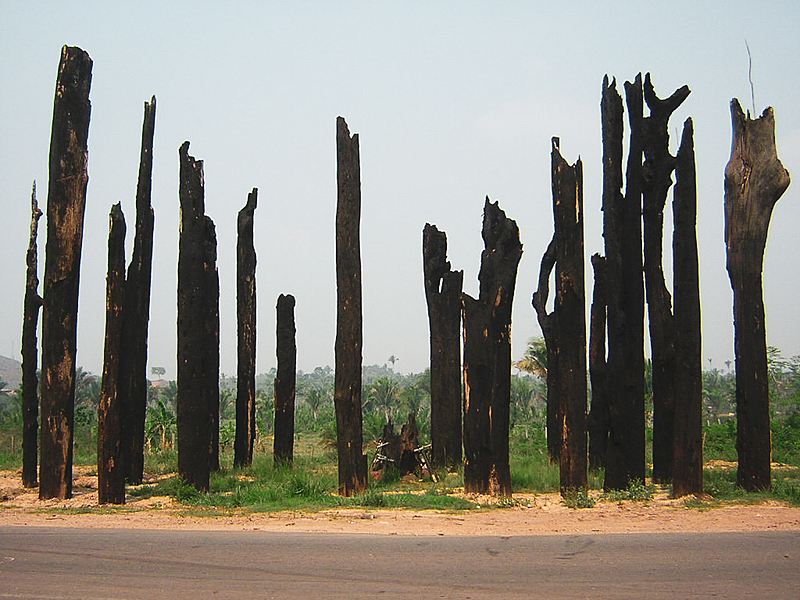