“I lived 41 years thinking that I had the police to protect my family. And that same police I admired took my son's life, took him from me. In a cruel and cowardly way”, says Maria Cristina Quirino Portugal, mother of Dennys Henrique, one of the nine victims of truculent military police action at the famous DZ7 Ball, which happens in Paraisópolis, a poor neighborhood in the south side of São Paulo.

December 1st 2019, should have been an ordinary night of fun for Denys and thousands of other young people, but it turned into a nightmare when the beats were abruptly replaced by tear gas, assaults and rubber bullets. The incident came to be known as the Paraisópolis Massacre. Those responsible remain unpunished to this day.

Videos of teenagers trapped in alleyways inside the community, surrounded by police officers who closed off possible exit routes, showed the despair and turmoil caused by the agents' actions.

They died of "mechanical asphyxiation by indirect suffocation", according to the coroner’s reports, the result of the being cornered and trapped by the police operation. According to the police, the youths were trampled to death. They lived in other impoverished regions of the city and were not familiar with the streets of Paraisópolis.

Authorities claim that they were chasing two men on a motorcycle who had fired shots at them. This version is contested by residents of the community, who say the agents blocked the streets with the aim of shutting down the ball. The siege resulted in panic and the disorderly flight of a crowd of young people, between narrow, dead-end alleys.

A year after the tragedy, the families remain without answers and fight to hold those who caused the deaths accountable. The investigation has not yet been completed and the 31 policemen involved, who were later suspended, have not yet been indicted.

Daily dealing with pain and longing, Maria Cristina makes it a point to talk about Denys Henrique. The teenager would turn 18 this December 31st and worked cleaning upholstery. In a story marked by a choked cry, she says that she did not know that her son had gone to the DZ7 Ball, and waited hours for his return. Her mother's heart knew that something was wrong. She waited until the phone rang on Sunday morning, asking someone responsible for the young man to come to a hospital in Campo Limpo.

The police's responsibility for the deaths of the “Paraisópolis 9”, as the victims became known, is unquestionable to her. "If the police had not entered the community that way, my son would have come home", criticizes Maria Cristina.

Maria Cristina demands that the agents be tried for their actions, marred by the misuse and disproportionate use of force. “They [policemen] are still on the job, receiving their salaires. They're still cops ... God only knows if they're not still killing. Demanding Justice is not something meant only for those types of days. We have to demand every day. And we will. They will not go unpunished”. 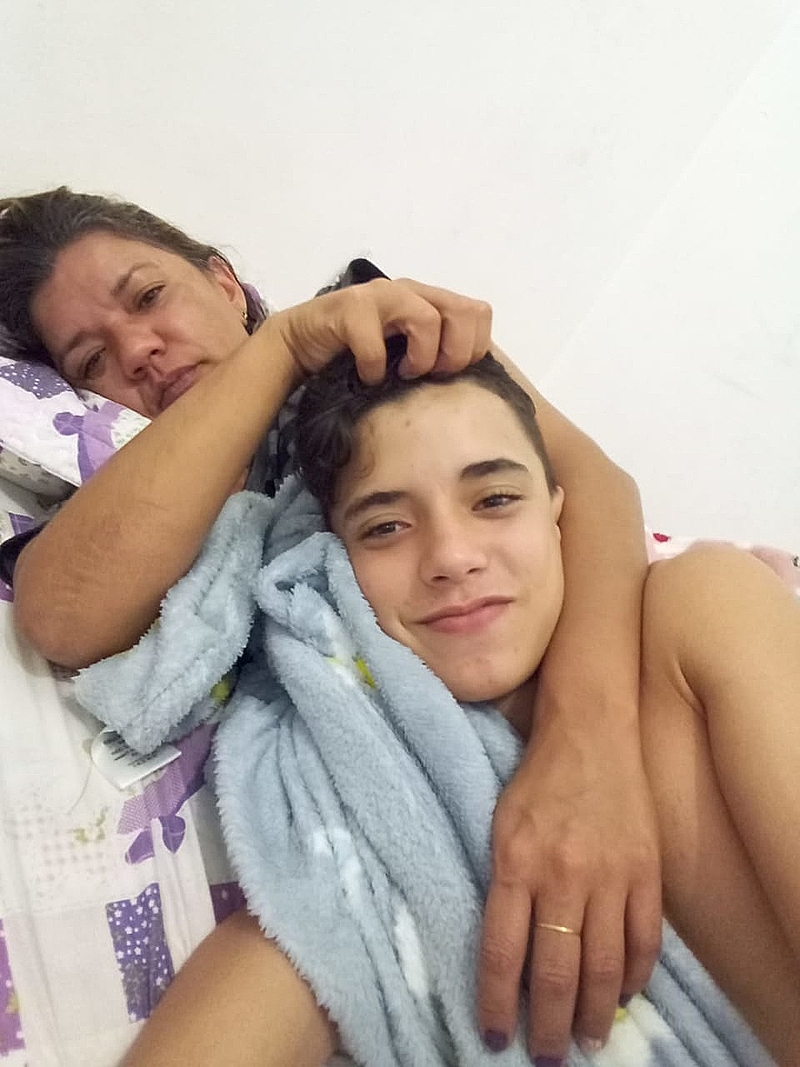 Maria Cristina's favorite photo of her son shows them together; Dennys would often keep his mom company before going to bed / Photo: personal archive

Faced with their mourning, the families of the nine victims, who did not know each other personally and lived in different regions of the city of São Paulo, came together. This articulation has requested meetings with authorities and organized protests.

Vagner Oliveira, Luara Oliveira's uncle, the only woman among the victims, has criticized the posture of governor João Doria's right-wing government in the state of São Paulo from the beginning. For him, the meetings held as soon as the deaths occurred were "theatrics" and did not result in effective actions.

Meanwhile, himself and Luara’s grandmother, who was very close to her granddaughter, suffer from longing for the loved one they have been raising since the age of 12. Vagner regrets that her future was cut so violently. “When I look at the photo of the 9, there is none there that was not young. Everyone there had a dream. She [Luara] had her dreams. The biggest one was having a home”, recalls Vagner.

According to Desirée Azevedo, a researcher at the Center for Anthropology and Forensic Archeology (CAAF) at the Federal University of São Paulo (Unifesp), the death of the nine youths explicitly reveals the existence of institutional support for police violence; starting with the police reports, which put forth a narrative that the victims reacted to police intervention. According to her, bureaucratic and legal frameworks hide the reality of what happened.

“For this to happen, we need not only a policeman who kills, but a set of other state actors who agree with this policeman who kills. The coroners who make the report, who evaluate the cases, the sherriff who gives a statement about what happened. The prosecutor who, in the face of that narrative, decides whether or not to file a complaint, the entire justice system as a whole. There is, in fact, an institutional structure that supports this kind of violence”, criticizes Azevedo, who has worked closely with the victims’ families over the past year.

Azevedo also argues that the killing of young people by the police should be considered a collective loss, and that it is essential to take into account social markers such as race and class.

According to the 2019 Brazilian Public Safety Yearbook, 75.4% of people killed by the police in Brazil are black, as are most of the victims of the Paraisópolis Massacre.