A genuinely Brazilian, and also Latin American theater, in which workers appropriate artistic means of production and the boundaries between actor and spectator are blurred. This was the goal of Augusto Boal’s, who was born 90 years ago on March 16th, in the city of Rio de Janeiro.

The bonds that Boal has built with working class organizations, both in the countryside and in the city, are fondly remembered to this day. The emptiness created by his death in 2009 is only surpassed by the contributions he made to Brazilian and Latin American culture.

The son of a baker and a housewife, Boal was born in 1931 and since he was a child he would play being a theater director. Although he graduated in Chemical Engineering, he always continued writing theatrical works, later graduating from drama school, and addressing topics such as precarious working conditions and racism.

In the 1950’s, while pursuing a doctorate in engineering in the United States, Boal took classes that introduced him to Soviet theater.

However, it was at the Teatro de Arena theater, starting in 1955, that Boal consolidated a dramaturgy focused on national characters and issues, or national-popular, until then unheard of in Brazilian theater.

Themes such as soccer, corruption and land issues, debates about imperialism and national sovereignty, came into play at that time. It’s in this context that Augusto Boal approached the Peasant Leagues, producing pieces about those “below” and their struggle for land. 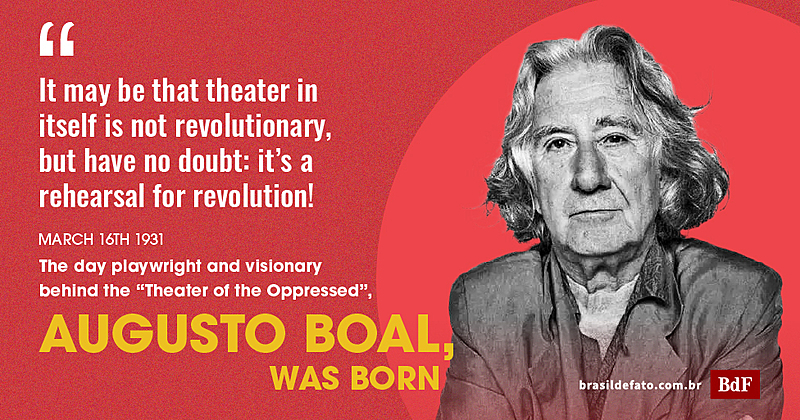 Persecuted in the civil-military dictatorship from 1964 to 1985, Boal remained in exile for years, in countries like Argentina, Peru, Ecuador, Portugal and France, but remained active in his cultural and political militancy. Teatro Imagem, Teatro Jornal, Teatro Forum and Teatro Invisível are some of the expressions of this theatrical framework, born amid the cycle of dictatorships that was sweeping Latin America.

The book “Teatro do Oprimido [Theater of the Oppressed] and other political poetics” is Boal's masterpiece, was published in Brazil in 1974. Thus, a theatrical method was born that brought together exercises, games and theatrical techniques to democratize the means of theatrical production and transform reality through dialogue.

Boal proposed to break the boundaries between scenic art and political practice, between actor and spectator, aimed at the creation of social beings who would become multipliers in the struggle for rights and citizenship.

Since 2017, Brazil has the National Day of the Theater of the Oppressed in its official calendar. The date chosen was precisely March 16th, in honor of its founder.

Named an “Ambassador for Theater” by the United Nations’ Educational, Scientific and Cultural Organization (Unesco), Boal battled leukemia and died of respiratory failure in May of 2009 in Rio de Janeiro.