In the last week of March, a police helicopter had its lights aimed at the outskirts of Echo Park, an emerging area of Los Angeles. The aircraft shed light on the newest "crime" in the region: living on the streets. By land and air, dozens of officers expelled those living in tents in the area, under the threat of arresting anyone who refused to comply.

Lawyer Gary Blasi, who is also a law professor at the University of California, Los Angeles (UCLA), and dedicates his career to defending the most vulnerable among the population, told Brasil de Fato that "unless people have a real alternative for shelter, living on the streets does not break any laws".

Also, according to the professor, the maneuver was made on the grounds that there was an offer of shelter available, which would make it mandatory for people to leave the camp.

"What happened in Echo Park will serve as a model for how the city of Los Angeles will deal with similar situations in other areas. Basically, the state will appeal to the police and offer temporary shelter, in temporary structures", says Blasi. He adds that "the problem is that these people will be sheltered for a short time and will soon be back on the streets".

Despite homelessness being a social problem, Blasi uses mathematics to guide his explanation. "Even before the pandemic, around 600 thousand families dedicated more than 90% of their income to rent payments. This means that, in the face of any setback, such as an illness or dismissal, entire families are forced onto the streets". 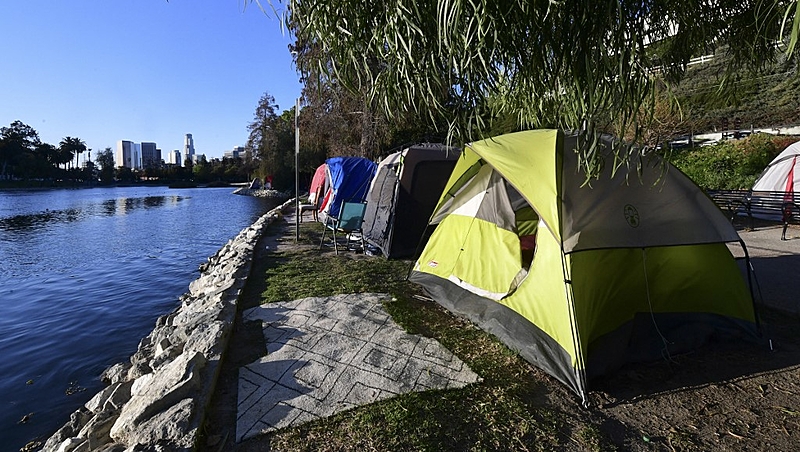 Architect and urban planner Dana Cuff, also a professor at UCLA, where she heads the prestigious CityLab, gives more numbers to explain the situation. "About 20,000 individuals leave the streets to move to a home each year in Los Angeles, but in the same period another 25,000 people take to the streets."

According to Cuff, in addition to the income gap, what contributes to the local housing crisis is the disparity between income and expenditure. "A social housing unit in Los Angeles costs something like $ 650,000 - and that's not even close to being affordable", she analyzes.

According to the LA Homeless Services Authority, just over 66,000 people lived on the city’s streets in 2020, representing a 12.7% increase from the previous year.

There are federal assistance programs, such as Section 8, that aim to subsidize permanent homes for individuals experiencing extreme social vulnerability, but the reality is that these and other welfare projects do not meet the demand.

"The Section 8 program has been frozen for years. The last time the government opened any kind of waiting list, the queue was around 10 years in length. Here in Los Angeles, when this project was resumed in some areas, the telephone system crashed due to the unexpected volume of calls", recalls Blasi. She likens the program to "winning the lottery". "And with today's prices, this government aid would only allow someone to rent something precarious in very peripheral areas".

Contributing to the problem is the fact that residents get together to protest against the development of housing projects in their neighborhoods. "I would say that every neighborhood in Los Angeles is against building social housing within its limits. And it is curious that the same people who protest against the harsh treatment by the police and the authorities towards homeless individuals, are the same ones who oppose these projects. Nobody wants them around", laments Dana Cuff.

Therefore, it is no coincidence that one in five homeless persons in the US people live in the city of Los Angeles. The state of California, the richest in the United States, accounts for half of the entire homeless population in the country.

"And the numbers are even less favorable for the black population. For African Americans, the chances of ending up on the streets are six to ten times higher", Blasi points out.

For Samuel Lutzker, who holds a PhD in sociology and studies homeless camps in the city, the alternatives presented by the authorities so far, are not a definitive answer to the crisis. "The shelters have a curfew and very strict rules, which often generates trauma in people. In addition, to live in one of these shelters or temporary housing programs, these individuals have to give up their community and affections, companions, friends and even pets. When it gets to that stage of homelessness, the community’s care, most of the time, is all that person has", he stated.

This does not mean however, that people "prefer to live on the streets". "Everyone wants a home, but in a context that is better than when people are living on the streets", Lutzker ponders.

He advocates for the implementation of large-scale programs that combat inequality and poverty in the United States. "We need to move to a socialist system, or else we will not be able to combat these forms of inequality that capitalism has created."