In the last six years of sanctions, Venezuela’s economy suffered serious strikes. As the country’s GDP and oil activity dropped by 60%, imports were taken over by the private sector. Along with the recent process of forced dollarization, the country now faces a boom of bodegons, commercial shops that specialize in selling imported goods. They sell about everything – items of the basic food basket, cleaning and personal hygiene products, candies, beverages, medications.

The first bodegons appeared in 2016 when the country was going through its largest supply crisis in recent history. Bodegas offered imported goods in middle-class areas, while so-called bachaqueros – people who sold smuggled goods for three times their original prices – crowded the streets.

The stores influenced the lives of many Venezuelans like Lorena Smith, who contemplated migrating but decided to stay in the country and open a bodega with her family. They did so last year. “We decided to take a bet on the country. Opening doors to bodegons ended up being a form of aid for Venezuelans”, she comments.

The debate is now on how the state can increase the revenue related to this commercial activity. Like Lorena, now the owner of the Caracas Market, most bodegon owners import goods using “door to door” services, hiring exporting companies, and buying products in wholesale markets in the United States and Europe.

:: What’s going on with Venezuela? Check out our full coverage ::

“We have relatives living in Spain and sometimes they send us specific products, but we mostly import from Miami. We have people shopping there, and my husband travels for that as well. During the pandemic, we started shopping on Amazon. We also have lots of suppliers here, who buy from large scale markets and resell things”, the trader explained.

In this type of sale, a container with a range of products might cost 7 to 7.5 thousand US dollars, almost three times the value of the same goods in conventional import models, that pays for the “nationalization” of the products.

“In this format, we are frequently forced to buy a container full of just one article. Also, ordinary imports take time, as they must comply with a number of regulations and obtain several authorizations. While 60% of the product’s final value may correspond to tax revenues, the container ends up costing between US$ 2 and 2.5 thousand dollars”, reports the management consultant Brigitte Mendoza. 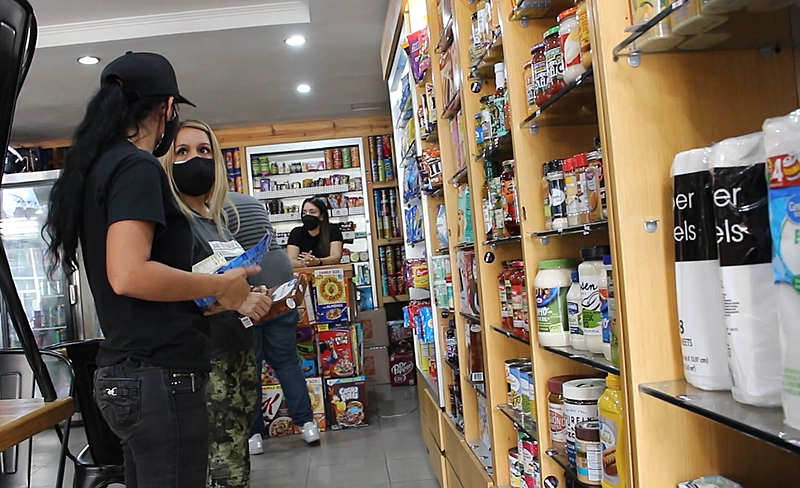 Having started in upper-middle-class zones, these days bodegons are an alternative of consumption for all social strata in Venezuela - Michele de Mello/Brasil de Fato

In addition to evading taxes, bodegon owners also stopped paying the 16% Value-Added Tax (VAT) during the sale, as they prioritize international payments systems such as Zelle, cryptocurrency, or even being paid in cash with dollars or euros.

As a consequence, the National Assembly currently debates a tax reform proposal to adapt the legislation to the new niche of the market.

:: Get to know the routine of those on the front line against covid-19 in Venezuela ::

The Minister of National Trade Eneida Laya Lugo met with bodegon owners to negotiate. The president of the National Assembly’s Committee of Economics, Jesús Faría, also stated that the congressmen and women want to hear the public before finding a solution.

“Dependence on petrol has led us to a situation where the efficacy of tax collection was left aside. The institutions make an exceptional effort to solve that, but fiscal evasion is an old and consolidated problem. We have also prepared a new offensive to collect what we have to with the current structure”, affirms the congressman of the ruling party, the PSUV (United Socialist Party of Venezuela). 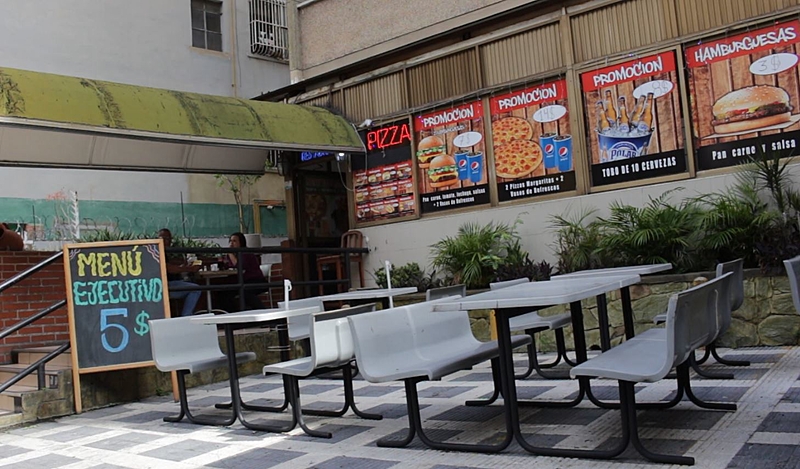 Venezuela has been through forced dollarization since 2019; prices and services paid in dollars are now common - Michele de Mello/Brasil de Fato

Venezuela is in its 42nd month of hyperinflation, the longest in the country’s history. Seeking to control the inflationary pace, the Central Bank placed restrictions on the issuance of the national currency, the Venezuelan Bolívar.

The measure seems to have worked, as Venezuela’s cumulative inflation index for the first trimester was 46.6%. However, the lack of Bolívars also increased the circulation of dollars. The devaluation of Venezuela’s currency in relation to the dollar has not accompanied the rhythm of disinflation – another point in favor of the imports.

In 2020, around 61% of the transactions in Venezuela were in dollars, according to Datanálisis. The country has also allowed citizens to open bank accounts in foreign currency and began collecting some fees in dollars, as is the case of gas in stations that offer “international prices”.

Imports also grew by 9.37% last year, representing around US$5.7 billion, whereas national production has dropped by 80% in the last five years, as stated by the Exporting Association of Venezuela.

For the economist Luís Salas, a series of economic measures adopted by the government helped prioritize the imports in detriment of stimulating national production.

In 2016, the Caracas City Hall – whose mayor at the time, Jorge Rodríguez, currently holds the position of speaker of the National Assembly – and the Bolivarian government release the Complementary Supply Plan (PAC), that granted tax exemptions to those who bought imported basic food basket goods.

That same year, President Nicolás Maduro launched the Local Committee for Supply and Production (CLAP), which ensured food to the most vulnerable sectors. The program, still in place, aids 6 million Venezuelan families through community organizing.

As the economic sanctions worsen, Venezuela stops paying its external debt and prioritizes national spending. Due to the embargo, the decision by the Venezuelan Executive ended up placing further restrictions on the international credit options available for the country.

In June 2018, the government decides to reduce the taxes collected on imports, delegating the domestic market supply fully to the private sector.

Months later, the government abandons the agreed price policy and the currency exchange control. Until that moment, the state collected foreign currency and sold them in auctions, while also selling subsided dollars to strategic sectors, such as food imports.

The government acknowledges dollarization as a reality in the country. While framing it as a distortion caused by the blockade, Maduro affirmed that it was good for the population.

“We had to overturn currency exchange control, it no longer served to fuel the economy. That allowed a number of actors to bring their dollars in, to boost the economy, generating businesses and productive activities. Among those businesses are bodegas, that offer of consumer goods to a sector of the population”, affirmed the president of the National Assembly’s Committee of Economics, Jesús Faría. 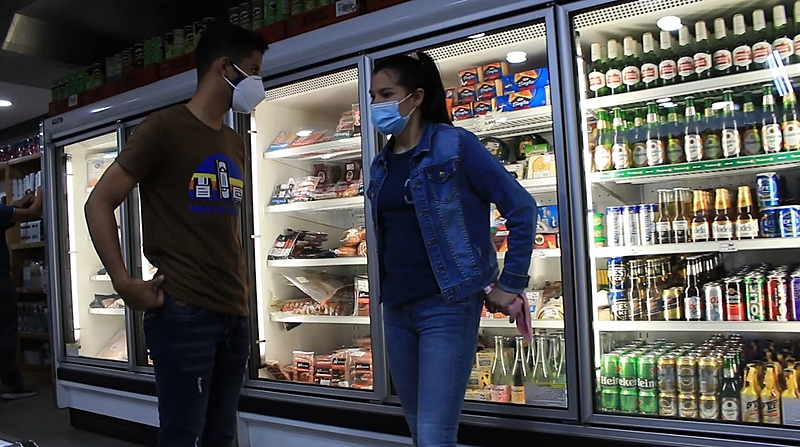 Despite the exemption of some fees, owners of the establishments still lack state incentive policies.

“We need the help of the government. Finish dollarizing the country, pay salaries in dollars so people can earn more for their works, so we can offer better salaries to our employees. I have no doubt that the sales would increase because not only a small sector would access products on bodegas, everyone would. Why not?”, questions Lorena Smith.

:: Check: Sanctions against Iran and Venezuela during a pandemic are cruel ::

With a different take on the situation, the Minister of the Economy defends that economic policies must prioritize the reactivation of the national production and the replacement of imports.

“A set of incentives making it cheaper to import than to produce locally were put in place. It might work as an immediate remedy for the supply problem, but in the medium- and long-term, it also leads to a food sovereignty problem. In a country suffering from international sanctions and a blockade, the solution to the crisis must include increasing the national production, not imports”, Salas concludes. 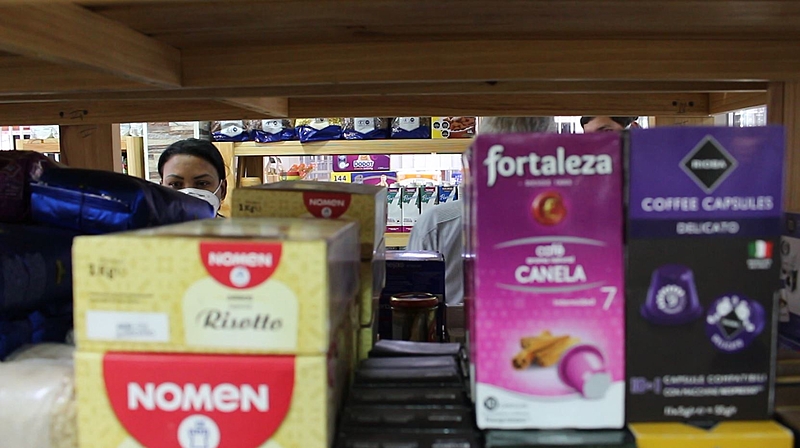 Bodego-economics is one of the aspects of the de-bolivarizarion of the Venezuelan economy, as the national currency loses its three main functions as a unit of account, value reserve, and payment currency.

For Salas, everything seems to be leading to the growing liberation of competition among different currencies in Venezuelan territory in the near future, including US dollars, euros, Brazilian reais, Colombian pesos, cryptocurrency, and a digital version of the Venezuelan bolívars.

“This is the most feasible and most dangerous scenario, as it invites a monetary chaos into the country, and that leads the state to increasingly lose control not only of the monetary policies but also of the larger economic system, that converts into an ‘every man by himself’ situation”, the economist concludes.