“The rally surpassed our expectations. Plus, it also means a resuming: we don't stop there. We have many demonstrations scheduled for May”. Márcio Santos straightens his Landless Workers Movement cap (MST, in Portuguese), of whose coordination he is a member, while assessing about 60 demonstrations of the National Rally of Struggles in Defense of Agrarian Reform organized by the Movement during the whole month of April.

With the motto “For land, roof, and food”, the so-called Red April – named after the Eldorado dos Carajás Massacre, which celebrates its 26th year in 2022 – marked the resuming of massive acts by MST after two years since the beginning of the covid-19 pandemic.

MST’s main and most recent actions were marches, retaking of lands, tree planting, shows, distribution of tons of food, the 16º Oziel Alves Landless Youth Pedagogical Camp, and the occupation of the headquarters of the National Institute for Colonization and Agrarian Reform (Incra, in Portuguese).

Despite being called Red April, the rally started before and will continue for at least another month. At the end of March, a national mobilization articulated between rural and social movements pressured the Federal Supreme Court to extend the suspension of evictions in the pandemic until June 30.

“We are reigniting”, says Márcio Santos, from São Paulo, assuring that the movement “has a series of activities and occupations scheduled for the beginning of May”.

“We still have 80,000 families camped from north to south of the country, reflecting the ongoing politics of concentrating land and wealth in the Brazilian rural areas”.

The comeback of popular agrarian reform

After two years without in-person meetings, around 150 landless youths from the states of Pará, Maranhão, and Tocantins gathered at the Youth Camp in Eldorado dos Carajás from April 13 to 17.

In the states of Rio de Janeiro, Sergipe, Bahia, Paraná, and Espírito Santo there were protests in the headquarters of Incra to denounce the interruption of agrarian reform. In Bahia, the occupation of Incra took place as the last action of a march with 3,500 people that covered 110 km (68.3 mi) from the city of Feira de Santana until Salvador, Bahia’s capital city.

To Polly Soares, an activist from Pará state and one of the national coordinators of MST popular front, just like Santos, the rally marked "the return of popular agrarian reform”.

“Since 2016, we have been living in Brazil a process, deepened during Bolsonaro’s government, of criminalization of social movements, interruption of agrarian reform and dismantling of regulatory bodies”, he states. “[It’s] a process that seeks to make agrarian reform an outdated agenda", Polly summarizes.

"When we bring it back to a rally after two years, we are saying that this agenda has not been overcome", he states, "on the contrary, agrarian reform needs to happen.". With the production of healthy food, distribution of land, and rural and urban workers having quality of life we will overcome the current economic crisis in which the Bolsonaro administration put Brazil”.

MST rally was also marked by land occupations in the states of Rio Grande do Norte, Ceará, Paraíba, Santa Catarina, Bahia, and in the Federal District. 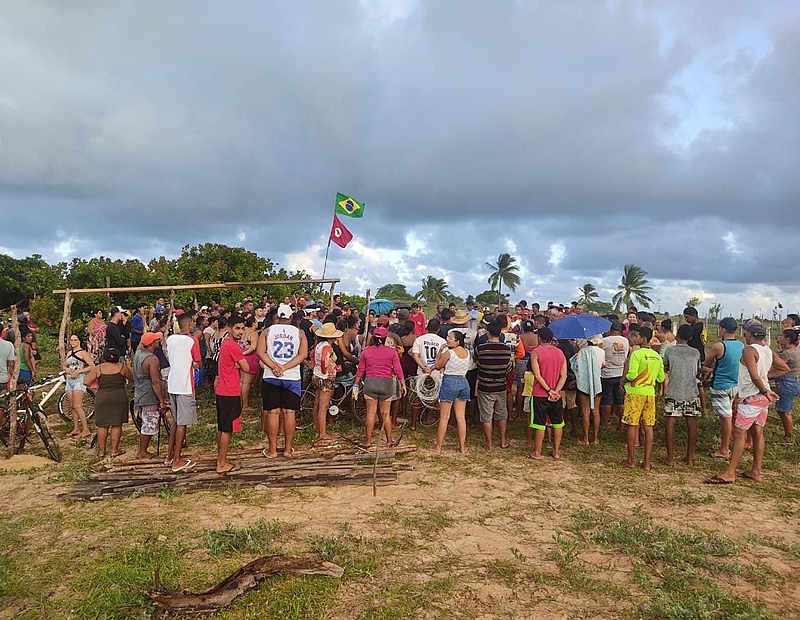 An area of the city of Rio do Fogo, Rio Grande do norte state, was occupied in April 17, National Day to Fight for Land / MST

In Guaratinga, Bahia state, more than 100 families have been occupying the unproductive Mata Verde Farm since the first days of April. In Pueiras, Ceará, 80 families occupied Lagoa dos Veados Farm, demanding that Ceará’s government expropriates the area through state law 17533/21.

Rural workers in Rio Grande do Norte established two occupations on country estates: one in Barra de Maxaranguape and the other in Rio do Fogo, on the north coast of the state, named Carajás Paradise occupation. In Paraíba state, about 50 families occupied the Maravilha power plant in the city of Caapora.

Families from the Quintino Lira Camp, in the city of Santa Luisa, Pará state, led a symbolic, temporary occupation at Cambará Farm. This is where the machinery used to destroy environmental reserve areas and fields of landless families is stored.

Márcio highlights that the occupation of lands “is a method used by MST since its beginning, in the 80s. It is also a fundamental feature of the Movement: to organize workers and establish occupations as a way to denounce this extremely archaic agrarian structure Brazil has and, at the same time, to demand land for every small farmer”.

“A lot has been said about Bolsonaro giving an end to MST, this and that", he states. "However, occupations showed the exact opposite", he claims. “We are more alive than ever”.