Ascended to the presidency of Brazil for the first time in 2018, after 27 years lived in the National Congress, the political character Jair Bolsonaro (Liberal Party), who is looking to be reelected, made statements similar to those he made four years ago, although the fact they evoke some differences.

Known for his anti-system speeches, Bolsonaro reached the country’s most important political post using fiery rhetoric against corruption and acidly attacking what is called “Centrão” (bloc of parties that de facto rules the National Congress and that share common interests). Now, he has this same group as the crucial political guarantor of his current campaign.

The connection Bolsonaro has with Centrão became clear with what happened during his official launching as the Liberal Party’s candidate for reelection for the presidency. The ceremony took place in the city of Rio de Janeiro on July 24.

The president of the Chamber of Deputies Arthur Lira (Progressive Party, Alagoas state), and Chief of staff Ciro Nogueira, Liberal Party’s president (temporarily removed from the position) were among the important names attending the event, which also brought together ministers and former ministers of the current administration, in addition to other political personalities. Lira and Nogueira are among Centrão’s main names.

According to political scientist Paulo Niccoli Ramirez, professor at São Paulo School of Sociology and Politics Foundation (FESPSP, in Portuguese), despite his anti-system speech, Bolsonaro “realized he does not have the necessary power to carry out a coup” as he had repeatedly indicated he would do. Since he lacks power, he ended up kneeling to the logic of institutional politics in Brazil”. 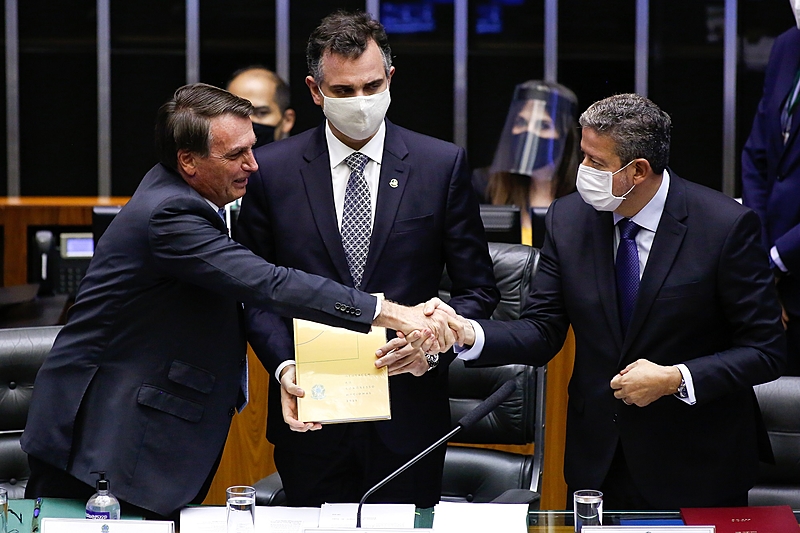 “The president learned to play the game following its rules, which is precisely through the majority of Congress. And this group, historically, since the proclamation of the Republic, is formed by a majority of wealthy landowners. In short, a conservative and reactionary elite that are part of Centrão”, Ramirez points out.

Looking back, it is possible to identify a set of old Bolsonaro statements against the way Centrão politicians conducted their political matters. In one of his speeches, in May 2018, Bolsonaro said that “Centrão” refers to a group that means the same as a “dirty word”.
In another moment, in June of that same year, the then federal deputy mocked on Twitter by saying that Centrão would be against his candidacy “for the sake of patriotism and ethics”.

- Centrão, for the sake of “patriotism and ethics” against Bolsonaro.
- It is nothing but desperation due to the possibility of being ousted from power.

“His anti-institutional stand remains. The difference is that now he has the support of an important part of Congress”, points out professor Pablo Holmes, from the Institute of Political Science at the University of Brasília /University of Brasilia (Ipol/UnB)

At the same time that Bolsonaro is professing, in 2022, a fragile discourse on corruption, he is also seeking to gain the sympathy of groups with which he had not flirted during previous campaigns, especially in the 2018 campaign.

“He is currently trying to get a bit closer to Northeast region voters and female voters, something he did not care about before. Undoubtedly, that is the most difficult task he will face, says Holmes when examining the most recent polls.

Polls show that Bolsonaro has a substantial disadvantage among female voters and Northeastern voters. Among voters from the Northeast region, the outlook for the current president is dismal: the PoderData poll released on July 12 showed that Bolsonaro would lose the elections in the Northeast region, where he would get 28% of the votes while Lula would have 62% of the votes in a second round. According to this poll, that is the only region where the electoral perspective is consolidated on the side of the Workers’ Party.
Bolsonaro has a long-standing discriminatory stance against Northeasterners and has already demonstrated it on many occasions. For instance, before and after the 2018 election, he repeatedly referred to people from Ceará state as “cabeçudos”, which can be roughly translated as “big heads”.

Now, he is trying to soften his addresses to Northeastern voters in order to gain their support. In a visit to Salvador, Bahia’s capital city, at the beginning of this month, Bolsonaro said that “the Northeast [region] is a really important part of our Brazil [sic]” and “we are one people, one race”.

Meanwhile, looking at another group of voters, the recently released BTG Pactual poll (July 25) shows that only 24% of women support Bolsonaro. Luiz Inácio Lula da Silva, who is leading the polls and, therefore, is the president’s main opponent, has 46% of female voter support.

It was precisely women that, in 2018, mobilized in an organized way and took to the streets before the election of that same year. In more than 100 cities in the country, they protested chanting the well-known chorus “Ele, não” (Not him, in English), a reference to the "anti-Bolsonaro" vote.

It was against women, too, that Bolsonaro ruled in many moments throughout his term, as seen in October 2021, when he vetoed a proposal to distribute sanitary pads for free to poor women.

The aforementioned public policy was approved in Congress and sanctioned as Law n° 14,214, whose vetoes were overridden by federal deputies and senators in March this year. Moreover, the president made a number of sexist statements and actions during his three-and-a-half years in office. In April 2019, for instance, Bolsonaro even stimulated sex tourism by saying that “anyone who wants to come here to have sex with a woman, feel free”.

His declarations generated a cascade of critical reactions, as did other such statements. That was the case in the episode in which he offended reporter Patrícia Campos Mello from the newspaper Folha de São Paulo by suggesting that she used sex in exchange for information for a report she was writing about Hans River do Rio Nascimento, a former employee of Yacows. Yacows is under investigation by the Fake News Joint Parliamentary Commission of Inquiry in Congress.

“She [Patrícia] was looking for a scoop [“furo”, in Portuguese]. She was looking for a “furo” against me at all costs”, said Bolsonaro in February 2020, making a sexist pun with the Portuguese idiomatic expression “dar um furo” (to get a scoop, in English), which is also a strong way to refer to sexual relations, more specifically to woman's sexual organ. Bolsonaro was condemned to pay 20,000 reais (US$ 3,850) to Patrícia for the personal harassment he caused her. It is in this scenario that Brazil’s president is seeking reelection and trying to get closer to female voters.

“Why did they have no worries about doing so? Because there was a moment then, almost in the same period of the "Not him" demonstrations, in which Bolsonaro was rising in the polls. They [Bolsonaro’s campaigners] did not care about [gaining women’s support]. Now, they are watching Lula holding a huge advantage over him in the polls. Therefore, he [Bolsonaro] is trying to soften the image he has among women, explains political scientist Thiago Trindade from Ipol/UnB.

Besides all that, Bolsonaro's 2022 version will face a rampant rejection rate. “Something to pay attention to today is that anti-Bolsonaro feelings are now more intense than anti-Workers’ Party positions, and it puts Bolsonaro in a hard position", says professor Pablo Holmes (Ipol/UnB).

A Datafolha survey in May this year showed that Bolsonaro is the most rejected candidate for the presidency: 54% of the electorate refuses the possibility of his second term. Meanwhile, Lula has a 33% rejection rate, maintaining the historic level the Workers’ Party had in the previous elections.

Pablo Holmes says that Bolsonaro is still a political character with predictable behavior. However, now he is in a more hostile environment than the one he found in the 2018 elections.

Following a term full of corruption scandals, pandemic mismanagement, covid denialism, and controversial "secret budgets", which pour money into policies determined mostly by Centrão, the president - who is looking to gain the support of Northeasterners and women in 2022 - is confronted with a less favorable scenario in the country than four years ago.

“This government faced crisis after crisis, and then created even more crises: a crisis against the Supreme Court, against the Electoral Justice, against electronic voting machines, Petrobras, the United States, France. This is a government that causes a lot of crises. And things continue to worsen. These factors are relevant because there is permanent confusion in the country, and it cannot generate stability. This is the Bolsonaro I see today", says Holmes.