A dam in southeastern Brazil is at risk of imminent collapse, prosecutors said, terrifying residents in the city of Barão de Cocais, Minas Gerais, just miles away from Brumadinho, where a dam burst less than five months ago, killing 240 people.

Brazilian prosecutors had access to a report produced by mining giant Vale that predicts that the dam at its Gongo Soco mine is at high risk of bursting this week, as the upper south structure at the Gongo Soco mine could be compromised if the movement in the northern embankment of the mine pit less than a mile from the dam is maintained.

The embankment is a slope designed to give the mine stability, but now this one in Barão de Cocais could rupture due to the current pace of its movement, the report found.

But the country’s mining regulator ANM reported that the northern embankment is surely expected to collapse by Saturday, May 25.

The head of the State Environment Department, Germano Vieira, told reporters that, once the embankment collapses, the risk of breaking the nearby tailings dam is 10 to 15 percent.

Local authorities have been notified last week, and prosecutors say the potential impacts of a burst could be even worse than what Vale reported.

Previously, in March, the alert level of the Gongo Soco mine had already been raised, and in February 400 people who live in nearby communities had to be evacuated.

Barão de Cocais residents had to perform an emergency evacuation drill on Saturday after Vale raised the alert level for the Upper South dam at the Gongo Soco mine.

The drill was conducted by the local civil defense authority and Vale teams, but few residents participated, according to Maria Júlia Andrade, from the Movement for People’s Sovereignty in Mining (MAM).

“Only the meeting spot downtown was crowded. The other meeting places -- seven of them -- were not very full. Almost no one attended, which shows how people are tired, really exhausted from having to deal with this entire situation,” Andrade said.

Residents staged a protest against Vale during the drill. 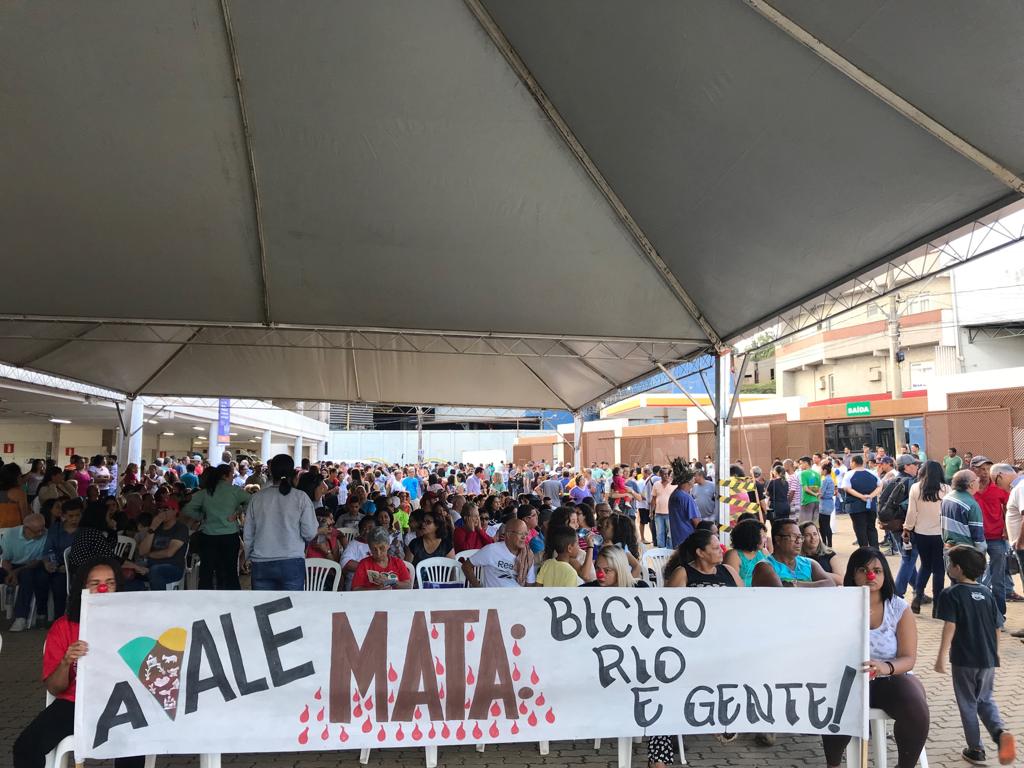 A Minas Gerais court fined Vale R$300 million (US$73 million) if the company does not produce a new report in 72 hours on the risks and impacts of a potential dam collapse.

The city of Barão de Cocais has a population of 32,000. In Feb. 8, 433 local residents had to evacuate their homes because of the risk of new collapses in the area. They are now staying at hotels paid by the miner.

Vale released a statement saying it is “monitoring the dam 24/7.” On Thursday, it started to build a wall less than four miles from the dam to hold the tailings if the dam ruptures due to the collapse of the embankment.

“We do not believe the information that we get is correct. They release small pieces of information, and everyone is panicking and scared. People don’t know if the risk is real, if the dam is going to burst or not. There is only panic and fear for having a ticking time bomb over their heads,” the MAM activist said.

Pablo Dias, from the national coordination of the Movement of People Impacted by Dams (MAB), said more than 6,000 Barão de Cocais residents could be affected if the Gongo Soco mine collapses.

He also said the local communities are not receiving proper support from Vale.

“Many residents are spontaneously leaving their homes, without any support from the appropriate agencies or financial help from Vale, which is the one responsible for putting people in this situation. There is really a sense of panic,” he said.

According to the mining regulator ANM, the dam may break depending on how the embankment collapses. If the burst is slow and gradual, it is less likely to result in a disaster. However, if it happens suddenly, there are more reasons to expect a tragedy.

*With reports by Lu Sudré, Rute Pina, and Marcos Hermanson.