In some corners of China, the coronavirus outbreak seems to have frozen time itself. Railway stations in Shanghai and Beijing—normally packed with millions of travelers returning home for the Spring Festival—stand empty; restaurants, malls, and public spaces are deserted. You wouldn’t know it from these spaces of strange stillness, yet across the country, the wheels of China’s state industry have kicked into overdrive as the Chinese Communist Party has marshaled its industries to meet the public health crisis at hand. Amidst Western distortions and the projection of opportunistic geopolitical agendas onto this crisis, the coronavirus provides a lens to understand China’s political economy—one that strives to ensure that the interests of private capital do not dictate politics against the interests of the people.  China’s mass mobilization of its state-owned industries to combat the coronavirus—including the construction of two new hospitals in Wuhan in ten days, lightening-speed production and distribution of price-controlled medical supplies, provision of free universal healthcare, and mass deployment of state medical workers—is a demonstration of China’s socialist political economy on the world stage.

The virus, first identified in Wuhan and now with confirmed cases in all of China’s 23 provinces, has thrown the country into crisis. By Friday, January 31 officials had confirmed a total of 11,821 diagnosed cases in mainland China and 259 fatalities. Meanwhile, hysterical media coverage in the West sparks rumors, racism, and now the U.S. has issued a travel ban on Chinese citizens coming from China. The racialization of the virus, much like during the SARS epidemic, has pinned blame for the outbreak on unhygienic Chinese cultural and culinary practices, reviving narratives that persist from the 19th century era of Chinese Exclusion laws throughout the West. In particular, a video from 2016 of travel television host Wang Mengyun eating a bat in the Pacific island nation of Palau, passed off as footage from Wuhan, circulated as “proof” of the disease’s exotic origins. 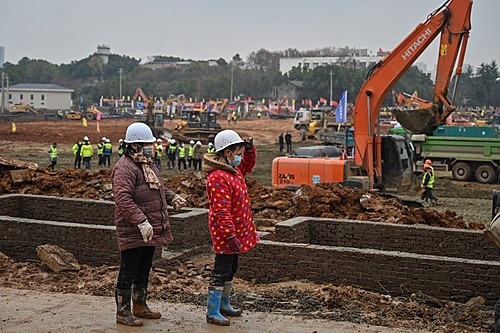 Many progressives in the West have condemned rising racism and stereotyping towards Chinese people, especially after a Chinese man in Sydney died of a heart attack when Australian bystanders, afraid of being “infected,” declined to provide CPR. Yet fewer have recognized the far greater role that Western geopolitical animus towards China has played in proliferating misinformation, distortion, and deception in Western news media’s response.

Various viral hoaxes—claiming that police are shooting patients in the streets of Wuhan, a hospital construction site in Wuhan is a cover up for a mass grave, and that the Chinese government itself had manufactured the virus—have gained enormous traction on the internet. Meanwhile, mainstream media coverage has insisted that the Communist Party is mismanaging the crisis, covering up information, and imposing authoritarian restrictions on citizens. In particular, the media has focused on reports that eight doctors in Wuhan predicted the virus weeks before it was announced publicly, but were silenced by party officials. This anecdote—an admitted error by the local Wuhan mayor and party secretary, both of whom have been resoundingly criticized by the Party upper echelons, including China’s Supreme People’s Court—has been represented as an indictment of the entire Chinese political system, proof of the illegitimacy of the Chinese Communist Party. As New York Times columnist Nicholas Kristoff put it, the world was now “pay[ing] for China’s dictatorship.” The Washington Post similarly called China’s efforts to contain the virus “brought to you by authoritarianism.” With complete lack of empathy for Chinese suffering, U.S. Commerce Secretary Wilbur Ross hoped that the outbreak could “help” bring jobs back to the United States. Interestingly, none of the Western coverage has mentioned that the mayor and party secretary of Wuhan have openly admitted their mistake in press briefings and popular TV interview shows, and the Party has made clear under no uncertain terms that they are mandating total transparency and information sharing.

In stark contrast, the World Health Organization has had nothing but effusive praise for the Chinese response. As W.H.O. Director-General Tedros Adhanom Ghebreyesus declared, "The Chinese government is to be congratulated for the extraordinary measures it has taken to contain the outbreak, despite the severe social and economic impact those measures are having on the Chinese people." For daring to commend China, the Director-General has faced relentless accusations of being paid off by the Communist Party, accusations which began when the World Health Organization simply declined to declare the outbreak a “global health emergency” on January 23 instead considering it primarily a domestic risk in China. As new transmissions of the virus have been confirmed in the U.S., Japan, and other countries, the W.H.O, revised its designation to declare a global health emergency. Even then, the Director-General stressed that the declaration “is not a vote of no confidence in China. On the contrary, the W.H.O. continues to have confidence in China’s capacity to control the outbreak.” Instead, he emphasized that the speed and effectiveness with which China detected the outbreak, isolated the virus, sequenced the genome and shared it with the world were “beyond words,” as were the country’s “commitment to transparency and to supporting other countries.” He continued: “In many ways, China is actually setting a new standard for outbreak response.”

This new standard that the World Health Organization has rightfully praised is, in effect, an affirmation of the power and efficacy of China’s socialist political economy. First and foremost, the Communist Party’s coronavirus is a testament to its continuing ethos of “serving the people.” In a moving press conference on January 29, Zhang Wenhong, chief doctor of the Shanghai Medical Treatment Expert Team, announced that he had replaced frontline civilian doctors with Party medical officials. Praising the efforts of first responders, he said that “we should not abuse dutiful people like them” and that Party members had each taken an oath to serve the people that now must be fulfilled. Similarly, W.H.O. Director-General Tedros praised Xi Jinping’s detailed knowledge of the outbreak and the fact that Ma Xiaowei, director of China’s National Health Commission, was on the frontlines directing the response in Wuhan.

But China’s ability to respond to this public health crisis of mass proportions is a testament to the reality of socialism with Chinese characteristics: though possessing a hybrid market economy, the Communist Party retains control over key industries and, unlike capitalist societies like the United States, remains independent from the interests of privatized capital.

China’s ability to respond to this public health crisis of mass proportions is a testament to the reality of socialism with Chinese characteristics, in which the Party answers to the people, not the interests of private capital.

The Party’s response to coronavirus makes this clear—the Ministry of Commerce is overseeing regional market coordination to ensure the flow of key products such as grain, meat, and eggs into Hubei province while coordinating production and distribution of masks and other medical products; Chinese e-commerce platforms have forbidden price increases on n95 masks and other necessities; the government has promised subsidies to cover medical expenses for all coronavirus patients; massive state purchases by the Hubei government to ensure adequate supply of masks, state-owned China State Construction Engineering undertook the rapid construction of two emergency quarantine hospitals in Wuhan, state-owned electrical company China State Grid (国家电网) contributed over 110 million yuan in cash and physical assets to support the construction of power facilities to support hospitals in Wuhan, while announcing that electricity would be ensured to Hubei residents during the quarantine regardless of their ability to pay—the list goes on. Perhaps most importantly, Chinese medical officials quickly isolated and sequenced the coronavirus genome ad immediately made the sequence public to the international community. In another hit to China’s economy, the Party likewise announced that it would extend the Spring Festival holiday to February 2 in an effort to keep workers home and contain the spread of the virus. 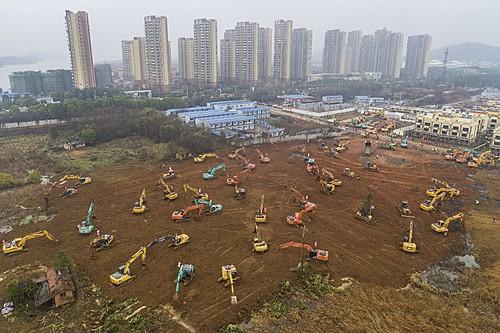 Dozens of bulldozers were used to build a hospital in ten days in Wuhan, China, to tackle coronavirus outbreak / STR/AFP

One can only imagine a very different response to coronavirus under capitalism: infected patients unable to afford treatment and too poor to take time off work; price hikes and scarcity of masks and other supplies for corporate profit; medical companies patenting gene sequences and life-saving treatments. Indeed, the World Health Organization has all but said as much: Tedros was clear in announcing a global health emergency that his primary concern is not what is happening in China, but the impacts of the virus if it begins spreading in countries with “weaker health systems.” As capitalist nations such as Germany, Japan, and the United States evacuate nationals from Wuhan (against the recommendation of Chinese officials), the ability of these states—where privatized healthcare, construction, pharmaceutical, transportation, food, and resources industries reign supreme—to handle the potential spread of the virus remains to be seen. In fact, during the 2009 H1N1 flu outbreak in the United States, 250,000 people were infected and hospitalized and 12,000 people died, while the U.S. was largely ill-equipped to address the crisis and hundreds of thousands incurred massive medical care costs.

Take, for instance Hong Kong’s response to the crisis, which provides a comparison case to illustrate the differences between the CPC response and a capitalist society’s ability to respond to the crisis. In Hong Kong, where the government and economic structure is notoriously neoliberalized and free market policies reign supreme, the government has been criticized for being unable to address mask production supplies, adequately deploy medical workers, or maintain social stability. Hong Kong’s mask production relies on privatized companies and prison labor. Mass pandemonium has broken out as Hong Kong residents have clamored for masks at private shops that have price gouged the cost of masks. Recently, the Chief Secretary of Hong Kong announced that Hong Kong will be receiving masks from mainland China’s production factories and will be forcing prisoners at the Lo Wu Correctional Institution to work non-stop and overnight to produce masks. In contrast, China’s mask production comes from state-owned enterprises, which has enabled China to rapidly increase the production of masks, ensure price-controls, and ration them to Chinese people. Interestingly, rather than address Hong Kong’s privatized economy, free market policies, lack of nationalized production capabilities, weakened government power as the core issue causing the city’s inability to address the crisis, Hong Kongers have broken out in a renewed round of vitriolic xenophobia, calling for the WHO Director-General to step down after he resoundingly praised China’s healthcare and crisis response infrastructure, demanding that only Hong Kong residents (as opposed to mainland Chinese and Southeast Asian migrant workers) to be allowed to purchase masks, blaming the coronavirus crisis on China’s “autocracy” and “authoritarianism,” and setting fire to a newly built quarantine residential building. While some may distort this situation to blame China for “neglecting” Hong Kong during the crisis, the reality is that the human suffering under Hong Kong’s neoliberal economy is the result not of so-called Chinese authoritarianism but on capitalist free market protections guaranteed and forced onto China by the United Kingdom during its “handover” negotiations. Perhaps Hong Kong’s integration into China’s political and economic system, vehemently decried as “imperialist,” could help to assuage some of these issues.

The Western media’s insistence on distorting and exploiting the coronavirus scare for its own geopolitical agenda is a testament to the ends to which it will go to forward a “world-against-China” narrative. Yet our thoughts are with countless families, workers, and citizens in Wuhan and beyond, who have found moments of joy, celebration, and resilience in the midst of a Spring Festival wrought by crisis. Ultimately, the Chinese Communist Party and workers across China inspire great confidence in their ability to contain coronavirus. Indeed, when the struggle is over and the world is safe, we will have socialism to thank.

*Qiao is a collective of Chinese leftists living in the diaspora aiming to be a bridge between the U.S. left, particularly the Chinese diaspora left, and China’s rich Marxist, anti-imperialist historical and contemporary political work and thought.