The Quilombo Campo Grande camp is currently resisting an attempted eviction which began early on Wednesday August 12. The camp located in the municipality of Campo do Meio, in the state of Minas Gerais, is home to 450 landless families. Dozens of police officers and vehicles have been brought in from neighboring cities to carry out the action.

The order to repossess the land was emitted by the State Justice, despite the fact that Minas Gerais decreed a state of public calamity due to the coronavirus pandemic. The order foresees the removal of the homes of the families as well as of the structure of the Eduardo Galeano Popular School. The familieshave resolved to stand their ground and are attempting to negotiate to remain in the camp. As of now, only the area with the school structure has been repossessed.

Members of the board of the Landless Rural Workers’ Movement (MST) denounce that the responsibility for any injured and dead as consequence of this direct conflict with the police forces, lies with Governor Romeu Zema, who allowed an eviction to be carried out amid the unprecedented public health crisis in the country.

According to the MST, the decision does not respect the agreement signed in the dialogue table about the conflict, which outlined that the families should stay in the camp as long as social isolation was necessary.

The MST has also highlighted that harassment by the police against those who live in the camp is frequent. On July 30, for example, more than 20 police agents invaded the houses in the camp and arrested landless worker Celso Augusto, who was then released on the same day.

According to those living at Quilombo Campo Grande, the police have entered the homes armed with rifles and pistols, breaking down the doors and windows. The MST denounced that the day before the eviction, the police surrounded the camp with vehicles and drones, intimidating the families. 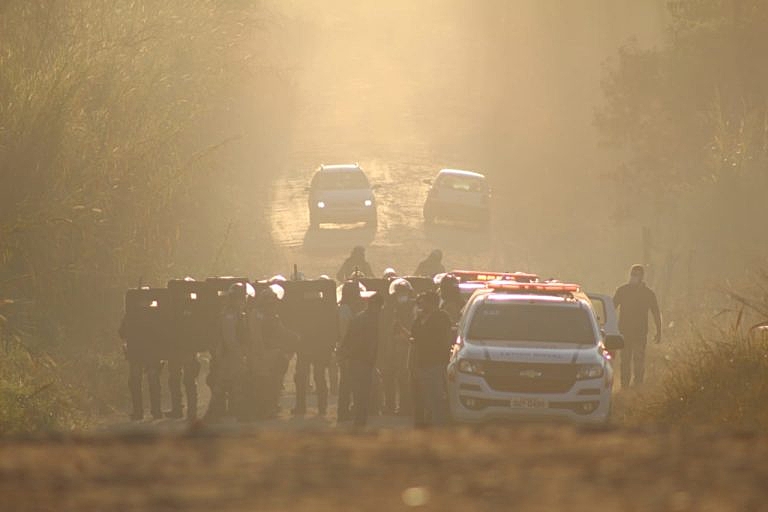 Police officers were brought in to carry out the repossession of land order. This would see the eviction of landless families and the dismantling of the Eduardo Galeano Popular School / MST

In 1998, 450 landless families occupied land belonging to the Ariadnópolis mill in the city of Campo do Meio in southern part of Minas Gerais state. Back then, the area was owned by Companhia Agropecuária Irmãos Azevedo (CAPIA), which was R$ 300 million (roughly US$80 million) in debt, and later went bankrupt, facing closure in 1996.

As time passed, the four thousand hectares (roughly 10,000 acres), where only sugarcane used to be cultivated, saw many more crops being grown. The land also became a source of livelihood for around 2,000 people.

The camp, Quilombo Campo Grande, is home to one of the largest coffee cooperatives in the state: Guaií. The co-op produces 510 metric tons of coffee a year – nearly 8,500 coffee sacks – as well as large amounts of corn and beans. In addition, 40 hectares are dedicated to a garden where they grow vegetables to feed the families who live in the camp and local communities. The camp also has 60,000 fruit trees and more than 60,000 native trees.

Over the years, the families worked hard to build houses with no support from the government. For decades, they organized and worked the land, mounting a resistance in a territory the State considers a bankruptcy estate.

With the looming order of land repossession, the Quilombo camp received dozens of videos and manifestations of solidarity. Letters were sent to the Tribunal of Justice of Minas Gerais and an online petition against eviction received traction locally and internationally.

Other entities such as the State Council for Human Rights, the presidency of the Commission for Human Rights and Minorities in the Chamber of Deputies, as well as other institutions expressed concern over the eviction and land repossession order in the midst of the pandemic.

“This is the reality when fascists are in government. Even though it is common knowledge that this was a corrupt maneuver done with a local judge, not one public organ was able to intervene to make sure these families remained in their homes, even in the midst of a pandemic. But we have learned to become stronger. And they can wait for our response. This land is ours by right and we will not budge one centimeter from it,” affirmed Tuíra Tule, from the state board of MST.